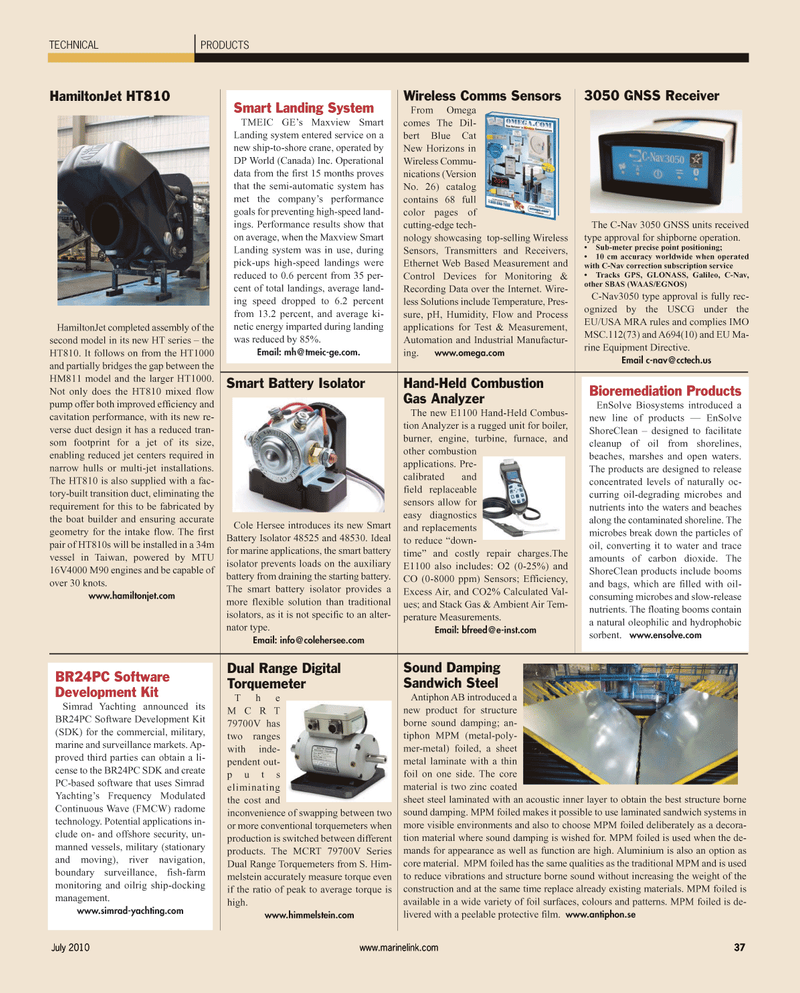 HT810. It follows on from the HT1000 and partially bridges the gap between the

Not only does the HT810 mixed flow pump offer both improved efficiency and cavitation performance, with its new re- verse duct design it has a reduced tran- som footprint for a jet of its size, enabling reduced jet centers required in narrow hulls or multi-jet installations.

The HT810 is also supplied with a fac- tory-built transition duct, eliminating the requirement for this to be fabricated by the boat builder and ensuring accurate geometry for the intake flow. The first pair of HT810s will be installed in a 34m vessel in Taiwan, powered by MTU 16V4000 M90 engines and be capable of over 30 knots. www.hamiltonjet.com

Ethernet Web Based Measurement and

MCRT 79700V has two ranges with inde- pendent out- puts eliminating the cost and inconvenience of swapping between two or more conventional torquemeters when production is switched between different products. The MCRT 79700V Series

Dual Range Torquemeters from S. Him- melstein accurately measure torque even if the ratio of peak to average torque is high. www.himmelstein.com

Battery Isolator 48525 and 48530. Ideal for marine applications, the smart battery isolator prevents loads on the auxiliary battery from draining the starting battery.

The smart battery isolator provides a more flexible solution than traditional isolators, as it is not specific to an alter- nator type.

Antiphon AB introduced a new product for structure borne sound damping; an- tiphon MPM (metal-poly- mer-metal) foiled, a sheet metal laminate with a thin foil on one side. The core material is two zinc coated sheet steel laminated with an acoustic inner layer to obtain the best structure borne sound damping. MPM foiled makes it possible to use laminated sandwich systems in more visible environments and also to choose MPM foiled deliberately as a decora- tion material where sound damping is wished for. MPM foiled is used when the de- mands for appearance as well as function are high. Aluminium is also an option as core material. MPM foiled has the same qualities as the traditional MPM and is used to reduce vibrations and structure borne sound without increasing the weight of the construction and at the same time replace already existing materials. MPM foiled is available in a wide variety of foil surfaces, colours and patterns. MPM foiled is de- livered with a peelable protective film. www.antiphon.se

The products are designed to release concentrated levels of naturally oc- curring oil-degrading microbes and nutrients into the waters and beaches along the contaminated shoreline. The microbes break down the particles of oil, converting it to water and trace amounts of carbon dioxide. The

ShoreClean products include booms and bags, which are filled with oil- consuming microbes and slow-release nutrients. The floating booms contain a natural oleophilic and hydrophobic sorbent. www.ensolve.com

DP World (Canada) Inc. Operational data from the first 15 months proves that the semi-automatic system has met the company’s performance goals for preventing high-speed land- ings. Performance results show that on average, when the Maxview Smart

Landing system was in use, during pick-ups high-speed landings were reduced to 0.6 percent from 35 per- cent of total landings, average land- ing speed dropped to 6.2 percent from 13.2 percent, and average ki- netic energy imparted during landing was reduced by 85%.