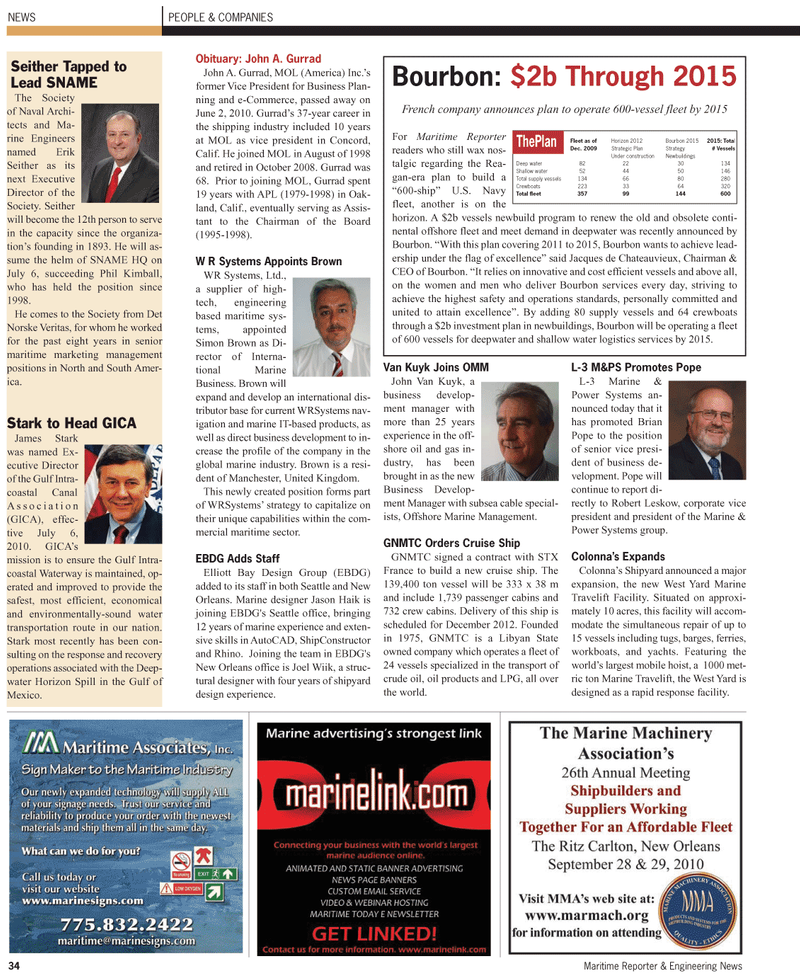 Business. Brown will expand and develop an international dis- tributor base for current WRSystems nav- igation and marine IT-based products, as well as direct business development to in- crease the profile of the company in the global marine industry. Brown is a resi- dent of Manchester, United Kingdom.

This newly created position forms part of WRSystems’ strategy to capitalize on their unique capabilities within the com- mercial maritime sector.

John Van Kuyk, a business develop- ment manager with more than 25 years experience in the off- shore oil and gas in- dustry, has been brought in as the new

GNMTC signed a contract with STX

France to build a new cruise ship. The 139,400 ton vessel will be 333 x 38 m and include 1,739 passenger cabins and 732 crew cabins. Delivery of this ship is scheduled for December 2012. Founded in 1975, GNMTC is a Libyan State owned company which operates a fleet of 24 vessels specialized in the transport of crude oil, oil products and LPG, all over the world.

Power Systems an- nounced today that it has promoted Brian

Pope to the position of senior vice presi- dent of business de- velopment. Pope will continue to report di- rectly to Robert Leskow, corporate vice president and president of the Marine &

Seither as its next Executive

Society. Seither will become the 12th person to serve in the capacity since the organiza- tion’s founding in 1893. He will as- sume the helm of SNAME HQ on

July 6, succeeding Phil Kimball, who has held the position since 1998.

He comes to the Society from Det

Norske Veritas, for whom he worked for the past eight years in senior maritime marketing management positions in North and South Amer- ica.

Association (GICA), effec- tive July 6, 2010. GICA’s mission is to ensure the Gulf Intra- coastal Waterway is maintained, op- erated and improved to provide the safest, most efficient, economical and environmentally-sound water transportation route in our nation.

For Maritime Reporter readers who still wax nos- talgic regarding the Rea- gan-era plan to build a “600-ship” U.S. Navy fleet, another is on the horizon. A $2b vessels newbuild program to renew the old and obsolete conti- nental offshore fleet and meet demand in deepwater was recently announced by

Bourbon. “With this plan covering 2011 to 2015, Bourbon wants to achieve lead- ership under the flag of excellence” said Jacques de Chateauvieux, Chairman &

CEO of Bourbon. “It relies on innovative and cost efficient vessels and above all, on the women and men who deliver Bourbon services every day, striving to achieve the highest safety and operations standards, personally committed and united to attain excellence”. By adding 80 supply vessels and 64 crewboats through a $2b investment plan in newbuildings, Bourbon will be operating a fleet of 600 vessels for deepwater and shallow water logistics services by 2015.