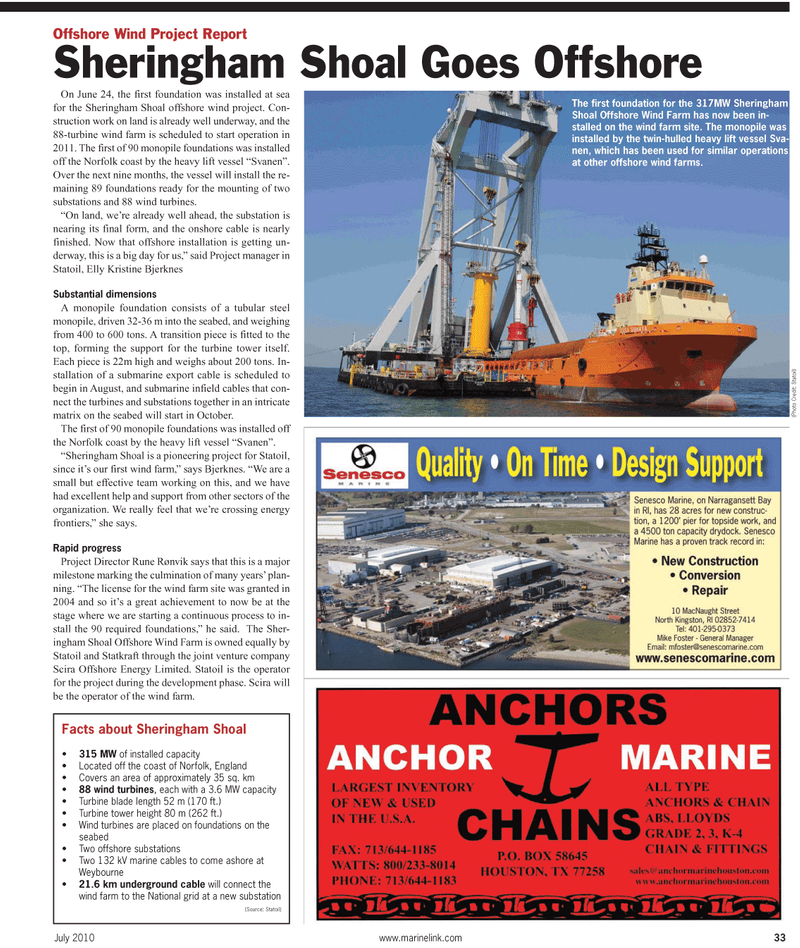 On June 24, the first foundation was installed at sea for the Sheringham Shoal offshore wind project. Con- struction work on land is already well underway, and the 88-turbine wind farm is scheduled to start operation in 2011. The first of 90 monopile foundations was installed off the Norfolk coast by the heavy lift vessel “Svanen”.

Over the next nine months, the vessel will install the re- maining 89 foundations ready for the mounting of two substations and 88 wind turbines. “On land, we’re already well ahead, the substation is nearing its final form, and the onshore cable is nearly finished. Now that offshore installation is getting un- derway, this is a big day for us,” said Project manager in

A monopile foundation consists of a tubular steel monopile, driven 32-36 m into the seabed, and weighing from 400 to 600 tons. A transition piece is fitted to the top, forming the support for the turbine tower itself.

Each piece is 22m high and weighs about 200 tons. In- stallation of a submarine export cable is scheduled to begin in August, and submarine infield cables that con- nect the turbines and substations together in an intricate matrix on the seabed will start in October.

The first of 90 monopile foundations was installed off the Norfolk coast by the heavy lift vessel “Svanen”. “Sheringham Shoal is a pioneering project for Statoil, since it’s our first wind farm,” says Bjerknes. “We are a small but effective team working on this, and we have had excellent help and support from other sectors of the organization. We really feel that we’re crossing energy frontiers,” she says.

Project Director Rune Rønvik says that this is a major milestone marking the culmination of many years’ plan- ning. “The license for the wind farm site was granted in 2004 and so it’s a great achievement to now be at the stage where we are starting a continuous process to in- stall the 90 required foundations,” he said. The Sher- ingham Shoal Offshore Wind Farm is owned equally by

Statoil and Statkraft through the joint venture company

Scira Offshore Energy Limited. Statoil is the operator for the project during the development phase. Scira will be the operator of the wind farm.

Weybourne • 21.6 km underground cable will connect the wind farm to the National grid at a new substation (Source: Statoil)

The first foundation for the 317MW Sheringham

Shoal Offshore Wind Farm has now been in- stalled on the wind farm site. The monopile was installed by the twin-hulled heavy lift vessel Sva- nen, which has been used for similar operations at other offshore wind farms. (Photo Cr edit: Statoil)