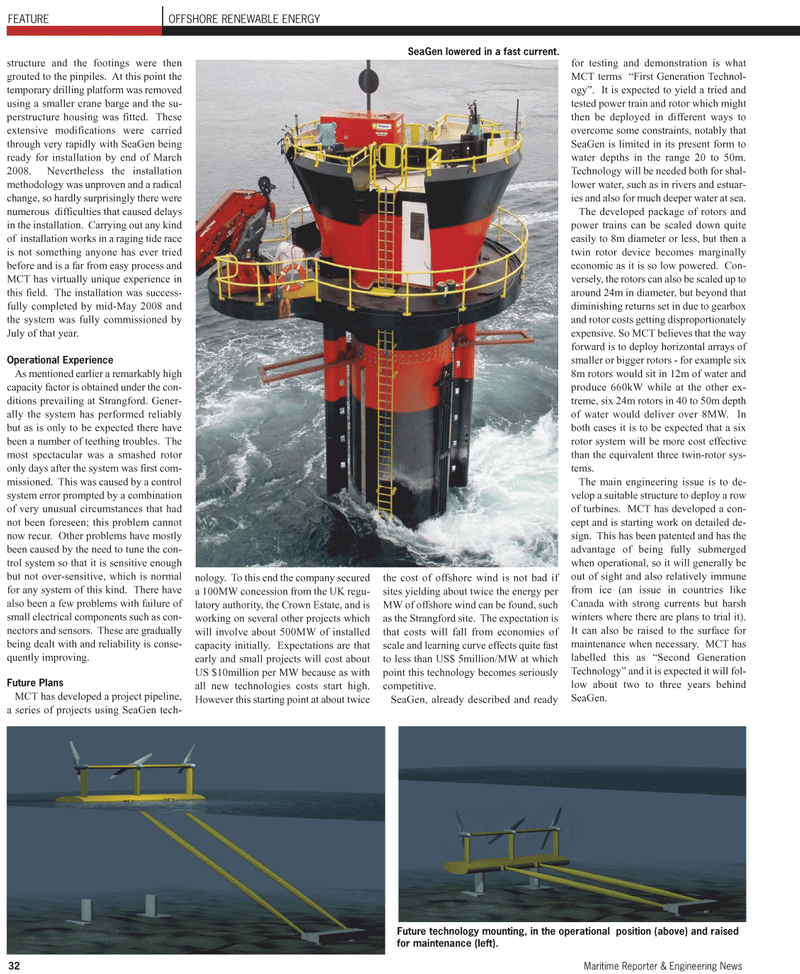 32 Maritime Reporter & Engineering News structure and the footings were then grouted to the pinpiles. At this point the temporary drilling platform was removed using a smaller crane barge and the su- perstructure housing was fitted. These extensive modifications were carried through very rapidly with SeaGen being ready for installation by end of March 2008. Nevertheless the installation methodology was unproven and a radical change, so hardly surprisingly there were numerous difficulties that caused delays in the installation. Carrying out any kind of installation works in a raging tide race is not something anyone has ever tried before and is a far from easy process and

MCT has virtually unique experience in this field. The installation was success- fully completed by mid-May 2008 and the system was fully commissioned by

July of that year.

As mentioned earlier a remarkably high capacity factor is obtained under the con- ditions prevailing at Strangford. Gener- ally the system has performed reliably but as is only to be expected there have been a number of teething troubles. The most spectacular was a smashed rotor only days after the system was first com- missioned. This was caused by a control system error prompted by a combination of very unusual circumstances that had not been foreseen; this problem cannot now recur. Other problems have mostly been caused by the need to tune the con- trol system so that it is sensitive enough but not over-sensitive, which is normal for any system of this kind. There have also been a few problems with failure of small electrical components such as con- nectors and sensors. These are gradually being dealt with and reliability is conse- quently improving.

MCT has developed a project pipeline, a series of projects using SeaGen tech- nology. To this end the company secured a 100MW concession from the UK regu- latory authority, the Crown Estate, and is working on several other projects which will involve about 500MW of installed capacity initially. Expectations are that early and small projects will cost about

US $10million per MW because as with all new technologies costs start high.

MW of offshore wind can be found, such as the Strangford site. The expectation is that costs will fall from economies of scale and learning curve effects quite fast to less than US$ 5million/MW at which point this technology becomes seriously competitive.

SeaGen, already described and ready for testing and demonstration is what

MCT terms “First Generation Technol- ogy”. It is expected to yield a tried and tested power train and rotor which might then be deployed in different ways to overcome some constraints, notably that

SeaGen is limited in its present form to water depths in the range 20 to 50m.

Technology will be needed both for shal- lower water, such as in rivers and estuar- ies and also for much deeper water at sea.

The developed package of rotors and power trains can be scaled down quite easily to 8m diameter or less, but then a twin rotor device becomes marginally economic as it is so low powered. Con- versely, the rotors can also be scaled up to around 24m in diameter, but beyond that diminishing returns set in due to gearbox and rotor costs getting disproportionately expensive. So MCT believes that the way forward is to deploy horizontal arrays of smaller or bigger rotors - for example six 8m rotors would sit in 12m of water and produce 660kW while at the other ex- treme, six 24m rotors in 40 to 50m depth of water would deliver over 8MW. In both cases it is to be expected that a six rotor system will be more cost effective than the equivalent three twin-rotor sys- tems.

The main engineering issue is to de- velop a suitable structure to deploy a row of turbines. MCT has developed a con- cept and is starting work on detailed de- sign. This has been patented and has the advantage of being fully submerged when operational, so it will generally be out of sight and also relatively immune from ice (an issue in countries like

Canada with strong currents but harsh winters where there are plans to trial it).

It can also be raised to the surface for maintenance when necessary. MCT has labelled this as “Second Generation

SeaGen lowered in a fast current.

Future technology mounting, in the operational position (above) and raised for maintenance (left).