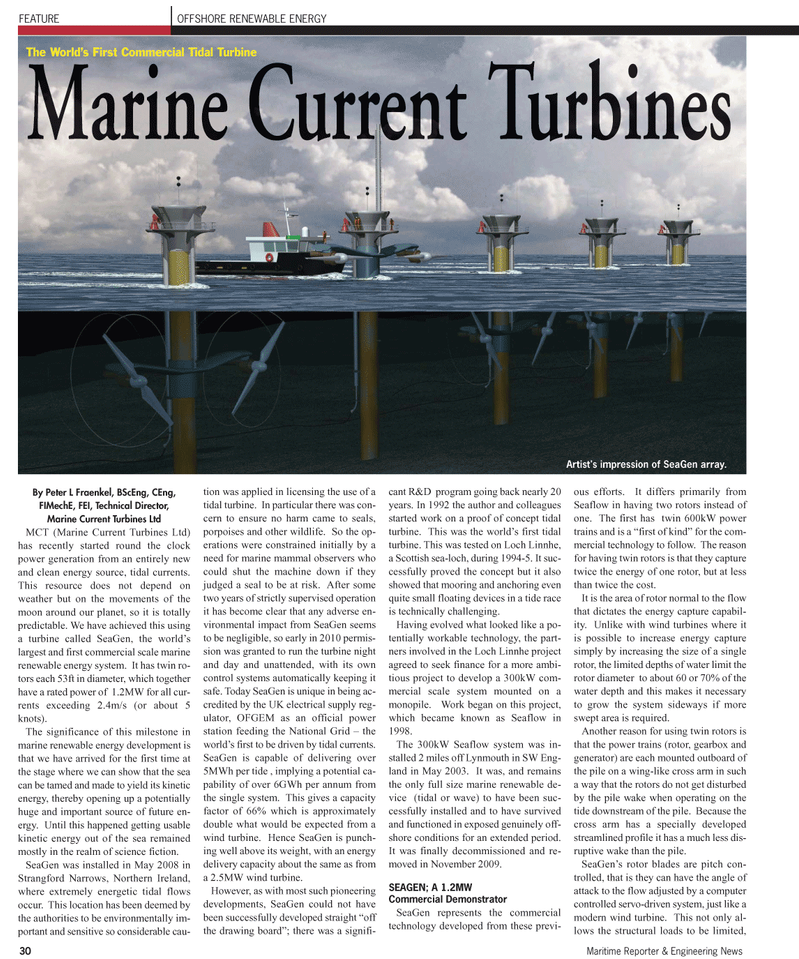 This resource does not depend on weather but on the movements of the moon around our planet, so it is totally predictable. We have achieved this using a turbine called SeaGen, the world’s largest and first commercial scale marine renewable energy system. It has twin ro- tors each 53ft in diameter, which together have a rated power of 1.2MW for all cur- rents exceeding 2.4m/s (or about 5 knots).

The significance of this milestone in marine renewable energy development is that we have arrived for the first time at the stage where we can show that the sea can be tamed and made to yield its kinetic energy, thereby opening up a potentially huge and important source of future en- ergy. Until this happened getting usable kinetic energy out of the sea remained mostly in the realm of science fiction.

SeaGen was installed in May 2008 in

Strangford Narrows, Northern Ireland, where extremely energetic tidal flows occur. This location has been deemed by the authorities to be environmentally im- portant and sensitive so considerable cau- tion was applied in licensing the use of a tidal turbine. In particular there was con- cern to ensure no harm came to seals, porpoises and other wildlife. So the op- erations were constrained initially by a need for marine mammal observers who could shut the machine down if they judged a seal to be at risk. After some two years of strictly supervised operation it has become clear that any adverse en- vironmental impact from SeaGen seems to be negligible, so early in 2010 permis- sion was granted to run the turbine night and day and unattended, with its own control systems automatically keeping it safe. Today SeaGen is unique in being ac- credited by the UK electrical supply reg- ulator, OFGEM as an official power station feeding the National Grid – the world’s first to be driven by tidal currents.

SeaGen is capable of delivering over 5MWh per tide , implying a potential ca- pability of over 6GWh per annum from the single system. This gives a capacity factor of 66% which is approximately double what would be expected from a wind turbine. Hence SeaGen is punch- ing well above its weight, with an energy delivery capacity about the same as from a 2.5MW wind turbine.

However, as with most such pioneering developments, SeaGen could not have been successfully developed straight “off the drawing board”; there was a signifi- cant R&D program going back nearly 20 years. In 1992 the author and colleagues started work on a proof of concept tidal turbine. This was the world’s first tidal turbine. This was tested on Loch Linnhe, a Scottish sea-loch, during 1994-5. It suc- cessfully proved the concept but it also showed that mooring and anchoring even quite small floating devices in a tide race is technically challenging.

Having evolved what looked like a po- tentially workable technology, the part- ners involved in the Loch Linnhe project agreed to seek finance for a more ambi- tious project to develop a 300kW com- mercial scale system mounted on a monopile. Work began on this project, which became known as Seaflow in 1998.

The 300kW Seaflow system was in- stalled 2 miles off Lynmouth in SW Eng- land in May 2003. It was, and remains the only full size marine renewable de- vice (tidal or wave) to have been suc- cessfully installed and to have survived and functioned in exposed genuinely off- shore conditions for an extended period.

It was finally decommissioned and re- moved in November 2009.

SeaGen represents the commercial technology developed from these previ- ous efforts. It differs primarily from

Seaflow in having two rotors instead of one. The first has twin 600kW power trains and is a “first of kind” for the com- mercial technology to follow. The reason for having twin rotors is that they capture twice the energy of one rotor, but at less than twice the cost.

It is the area of rotor normal to the flow that dictates the energy capture capabil- ity. Unlike with wind turbines where it is possible to increase energy capture simply by increasing the size of a single rotor, the limited depths of water limit the rotor diameter to about 60 or 70% of the water depth and this makes it necessary to grow the system sideways if more swept area is required.

Another reason for using twin rotors is that the power trains (rotor, gearbox and generator) are each mounted outboard of the pile on a wing-like cross arm in such a way that the rotors do not get disturbed by the pile wake when operating on the tide downstream of the pile. Because the cross arm has a specially developed streamlined profile it has a much less dis- ruptive wake than the pile.

SeaGen’s rotor blades are pitch con- trolled, that is they can have the angle of attack to the flow adjusted by a computer controlled servo-driven system, just like a modern wind turbine. This not only al- lows the structural loads to be limited,