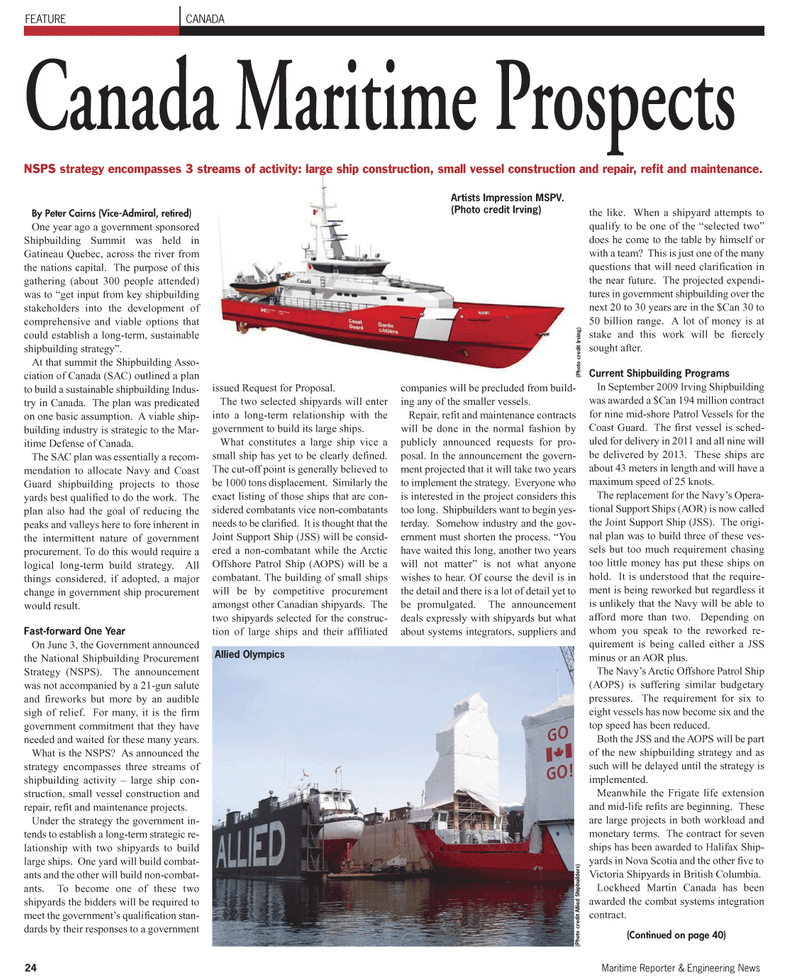 One year ago a government sponsored

Shipbuilding Summit was held in

Gatineau Quebec, across the river from the nations capital. The purpose of this gathering (about 300 people attended) was to “get input from key shipbuilding stakeholders into the development of comprehensive and viable options that could establish a long-term, sustainable shipbuilding strategy”.

At that summit the Shipbuilding Asso- ciation of Canada (SAC) outlined a plan to build a sustainable shipbuilding Indus- try in Canada. The plan was predicated on one basic assumption. A viable ship- building industry is strategic to the Mar- itime Defense of Canada.

Guard shipbuilding projects to those yards best qualified to do the work. The plan also had the goal of reducing the peaks and valleys here to fore inherent in the intermittent nature of government procurement. To do this would require a logical long-term build strategy. All things considered, if adopted, a major change in government ship procurement would result.

On June 3, the Government announced the National Shipbuilding Procurement

Strategy (NSPS). The announcement was not accompanied by a 21-gun salute and fireworks but more by an audible sigh of relief. For many, it is the firm government commitment that they have needed and waited for these many years.

Under the strategy the government in- tends to establish a long-term strategic re- lationship with two shipyards to build large ships. One yard will build combat- ants and the other will build non-combat- ants. To become one of these two shipyards the bidders will be required to meet the government’s qualification stan- dards by their responses to a government issued Request for Proposal.

The two selected shipyards will enter into a long-term relationship with the government to build its large ships.

What constitutes a large ship vice a small ship has yet to be clearly defined.

The cut-off point is generally believed to be 1000 tons displacement. Similarly the exact listing of those ships that are con- sidered combatants vice non-combatants needs to be clarified. It is thought that the

Offshore Patrol Ship (AOPS) will be a combatant. The building of small ships will be by competitive procurement amongst other Canadian shipyards. The two shipyards selected for the construc- tion of large ships and their affiliated companies will be precluded from build- ing any of the smaller vessels.

Repair, refit and maintenance contracts will be done in the normal fashion by publicly announced requests for pro- posal. In the announcement the govern- ment projected that it will take two years to implement the strategy. Everyone who is interested in the project considers this too long. Shipbuilders want to begin yes- terday. Somehow industry and the gov- ernment must shorten the process. “You have waited this long, another two years will not matter” is not what anyone wishes to hear. Of course the devil is in the detail and there is a lot of detail yet to be promulgated. The announcement deals expressly with shipyards but what about systems integrators, suppliers and the like. When a shipyard attempts to qualify to be one of the “selected two” does he come to the table by himself or with a team? This is just one of the many questions that will need clarification in the near future. The projected expendi- tures in government shipbuilding over the next 20 to 30 years are in the $Can 30 to 50 billion range. A lot of money is at stake and this work will be fiercely sought after.

Coast Guard. The first vessel is sched- uled for delivery in 2011 and all nine will be delivered by 2013. These ships are about 43 meters in length and will have a maximum speed of 25 knots.

The replacement for the Navy’s Opera- tional Support Ships (AOR) is now called the Joint Support Ship (JSS). The origi- nal plan was to build three of these ves- sels but too much requirement chasing too little money has put these ships on hold. It is understood that the require- ment is being reworked but regardless it is unlikely that the Navy will be able to afford more than two. Depending on whom you speak to the reworked re- quirement is being called either a JSS minus or an AOR plus.

The Navy’s Arctic Offshore Patrol Ship (AOPS) is suffering similar budgetary pressures. The requirement for six to eight vessels has now become six and the top speed has been reduced.

Both the JSS and the AOPS will be part of the new shipbuilding strategy and as such will be delayed until the strategy is implemented.

Meanwhile the Frigate life extension and mid-life refits are beginning. These are large projects in both workload and monetary terms. The contract for seven ships has been awarded to Halifax Ship- yards in Nova Scotia and the other five to