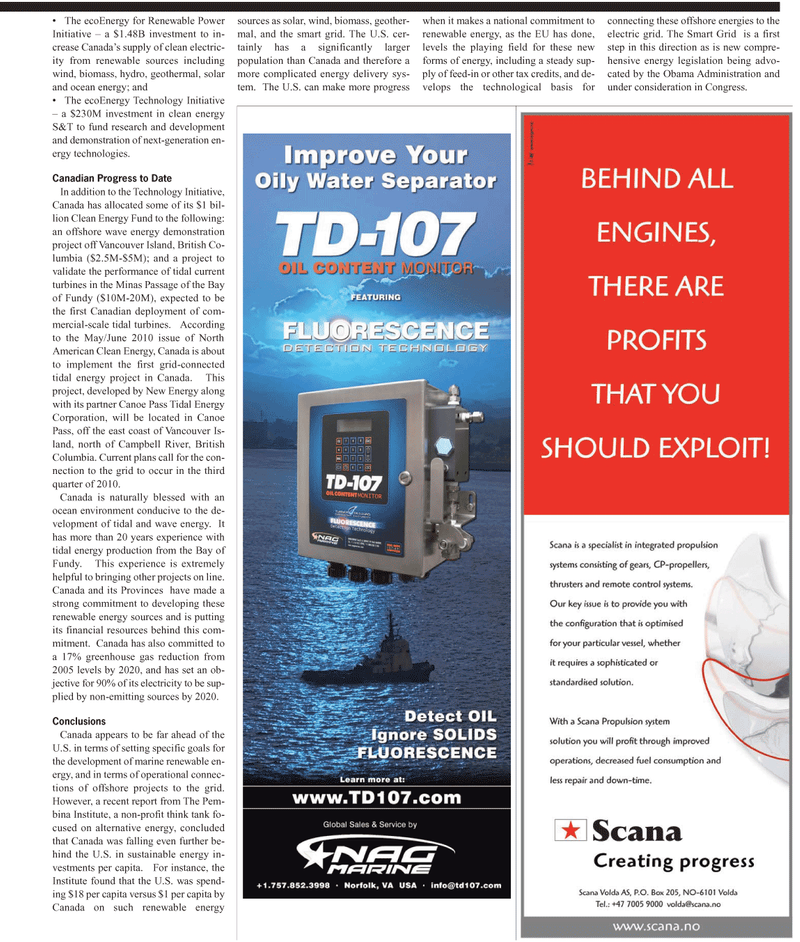 • The ecoEnergy for Renewable Power

Initiative – a $1.48B investment to in- crease Canada’s supply of clean electric- ity from renewable sources including wind, biomass, hydro, geothermal, solar and ocean energy; and • The ecoEnergy Technology Initiative – a $230M investment in clean energy

S&T to fund research and development and demonstration of next-generation en- ergy technologies.

In addition to the Technology Initiative,

Canada has allocated some of its $1 bil- lion Clean Energy Fund to the following: an offshore wave energy demonstration project off Vancouver Island, British Co- lumbia ($2.5M-$5M); and a project to validate the performance of tidal current turbines in the Minas Passage of the Bay of Fundy ($10M-20M), expected to be the first Canadian deployment of com- mercial-scale tidal turbines. According to the May/June 2010 issue of North

American Clean Energy, Canada is about to implement the first grid-connected tidal energy project in Canada. This project, developed by New Energy along with its partner Canoe Pass Tidal Energy

Corporation, will be located in Canoe

Pass, off the east coast of Vancouver Is- land, north of Campbell River, British

Columbia. Current plans call for the con- nection to the grid to occur in the third quarter of 2010.

Canada is naturally blessed with an ocean environment conducive to the de- velopment of tidal and wave energy. It has more than 20 years experience with tidal energy production from the Bay of

Fundy. This experience is extremely helpful to bringing other projects on line.

Canada and its Provinces have made a strong commitment to developing these renewable energy sources and is putting its financial resources behind this com- mitment. Canada has also committed to a 17% greenhouse gas reduction from 2005 levels by 2020, and has set an ob- jective for 90% of its electricity to be sup- plied by non-emitting sources by 2020.

Canada appears to be far ahead of the

U.S. in terms of setting specific goals for the development of marine renewable en- ergy, and in terms of operational connec- tions of offshore projects to the grid.

However, a recent report from The Pem- bina Institute, a non-profit think tank fo- cused on alternative energy, concluded that Canada was falling even further be- hind the U.S. in sustainable energy in- vestments per capita. For instance, the

Institute found that the U.S. was spend- ing $18 per capita versus $1 per capita by

Canada on such renewable energy sources as solar, wind, biomass, geother- mal, and the smart grid. The U.S. cer- tainly has a significantly larger population than Canada and therefore a more complicated energy delivery sys- tem. The U.S. can make more progress when it makes a national commitment to renewable energy, as the EU has done, levels the playing field for these new forms of energy, including a steady sup- ply of feed-in or other tax credits, and de- velops the technological basis for connecting these offshore energies to the electric grid. The Smart Grid is a first step in this direction as is new compre- hensive energy legislation being advo- cated by the Obama Administration and under consideration in Congress.