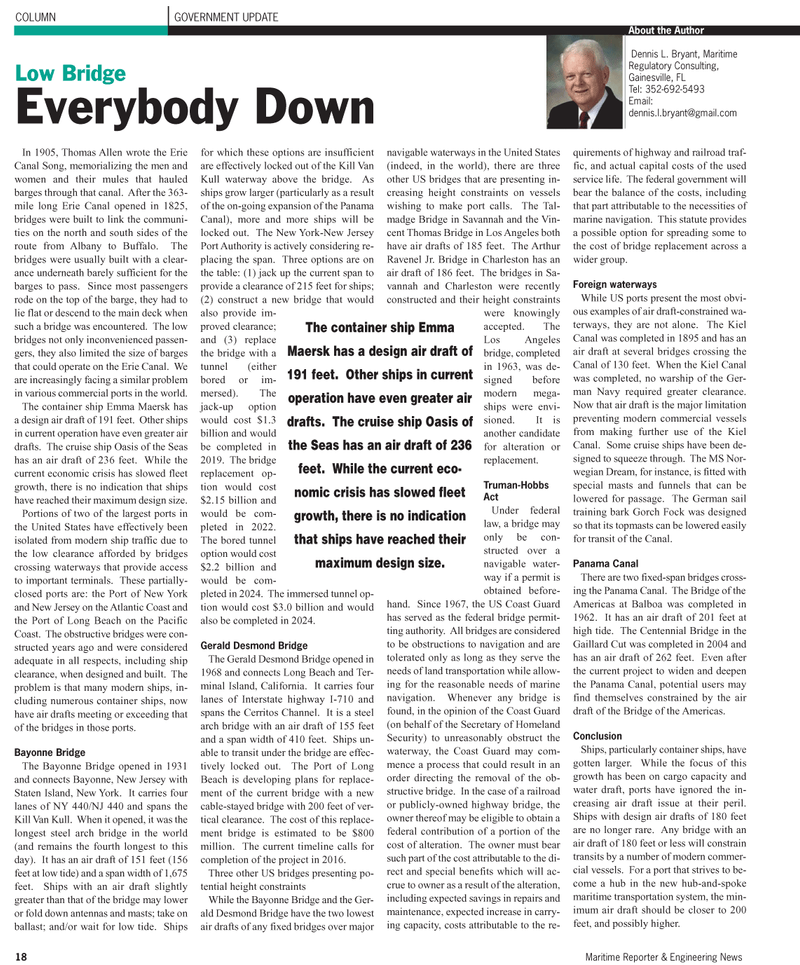 Canal Song, memorializing the men and women and their mules that hauled barges through that canal. After the 363- mile long Erie Canal opened in 1825, bridges were built to link the communi- ties on the north and south sides of the route from Albany to Buffalo. The bridges were usually built with a clear- ance underneath barely sufficient for the barges to pass. Since most passengers rode on the top of the barge, they had to lie flat or descend to the main deck when such a bridge was encountered. The low bridges not only inconvenienced passen- gers, they also limited the size of barges that could operate on the Erie Canal. We are increasingly facing a similar problem in various commercial ports in the world.

The container ship Emma Maersk has a design air draft of 191 feet. Other ships in current operation have even greater air drafts. The cruise ship Oasis of the Seas has an air draft of 236 feet. While the current economic crisis has slowed fleet growth, there is no indication that ships have reached their maximum design size.

Portions of two of the largest ports in the United States have effectively been isolated from modern ship traffic due to the low clearance afforded by bridges crossing waterways that provide access to important terminals. These partially- closed ports are: the Port of New York and New Jersey on the Atlantic Coast and the Port of Long Beach on the Pacific

Coast. The obstructive bridges were con- structed years ago and were considered adequate in all respects, including ship clearance, when designed and built. The problem is that many modern ships, in- cluding numerous container ships, now have air drafts meeting or exceeding that of the bridges in those ports.

The Bayonne Bridge opened in 1931 and connects Bayonne, New Jersey with

Kill Van Kull. When it opened, it was the longest steel arch bridge in the world (and remains the fourth longest to this day). It has an air draft of 151 feet (156 feet at low tide) and a span width of 1,675 feet. Ships with an air draft slightly greater than that of the bridge may lower or fold down antennas and masts; take on ballast; and/or wait for low tide. Ships for which these options are insufficient are effectively locked out of the Kill Van

Kull waterway above the bridge. As ships grow larger (particularly as a result of the on-going expansion of the Panama

Canal), more and more ships will be locked out. The New York-New Jersey

Port Authority is actively considering re- placing the span. Three options are on the table: (1) jack up the current span to provide a clearance of 215 feet for ships; (2) construct a new bridge that would also provide im- proved clearance; and (3) replace the bridge with a tunnel (either bored or im- mersed). The jack-up option would cost $1.3 billion and would be completed in 2019. The bridge replacement op- tion would cost $2.15 billion and would be com- pleted in 2022.

The Gerald Desmond Bridge opened in 1968 and connects Long Beach and Ter- minal Island, California. It carries four lanes of Interstate highway I-710 and spans the Cerritos Channel. It is a steel arch bridge with an air draft of 155 feet and a span width of 410 feet. Ships un- able to transit under the bridge are effec- tively locked out. The Port of Long

While the Bayonne Bridge and the Ger- ald Desmond Bridge have the two lowest air drafts of any fixed bridges over major navigable waterways in the United States (indeed, in the world), there are three other US bridges that are presenting in- creasing height constraints on vessels wishing to make port calls. The Tal- madge Bridge in Savannah and the Vin- cent Thomas Bridge in Los Angeles both have air drafts of 185 feet. The Arthur

Ravenel Jr. Bridge in Charleston has an air draft of 186 feet. The bridges in Sa- vannah and Charleston were recently constructed and their height constraints were knowingly accepted. The

Los Angeles bridge, completed in 1963, was de- signed before modern mega- ships were envi- sioned. It is another candidate for alteration or replacement.

Under federal law, a bridge may only be con- structed over a navigable water- way if a permit is obtained before- hand. Since 1967, the US Coast Guard has served as the federal bridge permit- ting authority. All bridges are considered to be obstructions to navigation and are tolerated only as long as they serve the needs of land transportation while allow- ing for the reasonable needs of marine navigation. Whenever any bridge is found, in the opinion of the Coast Guard (on behalf of the Secretary of Homeland

Security) to unreasonably obstruct the waterway, the Coast Guard may com- mence a process that could result in an order directing the removal of the ob- structive bridge. In the case of a railroad or publicly-owned highway bridge, the owner thereof may be eligible to obtain a federal contribution of a portion of the cost of alteration. The owner must bear such part of the cost attributable to the di- rect and special benefits which will ac- crue to owner as a result of the alteration, including expected savings in repairs and maintenance, expected increase in carry- ing capacity, costs attributable to the re- quirements of highway and railroad traf- fic, and actual capital costs of the used service life. The federal government will bear the balance of the costs, including that part attributable to the necessities of marine navigation. This statute provides a possible option for spreading some to the cost of bridge replacement across a wider group.

While US ports present the most obvi- ous examples of air draft-constrained wa- terways, they are not alone. The Kiel

Canal of 130 feet. When the Kiel Canal was completed, no warship of the Ger- man Navy required greater clearance.

Canal. Some cruise ships have been de- signed to squeeze through. The MS Nor- wegian Dream, for instance, is fitted with special masts and funnels that can be lowered for passage. The German sail training bark Gorch Fock was designed so that its topmasts can be lowered easily for transit of the Canal.

There are two fixed-span bridges cross- ing the Panama Canal. The Bridge of the

Americas at Balboa was completed in 1962. It has an air draft of 201 feet at high tide. The Centennial Bridge in the

Gaillard Cut was completed in 2004 and has an air draft of 262 feet. Even after the current project to widen and deepen the Panama Canal, potential users may find themselves constrained by the air draft of the Bridge of the Americas.

Ships, particularly container ships, have gotten larger. While the focus of this growth has been on cargo capacity and water draft, ports have ignored the in- creasing air draft issue at their peril.

Ships with design air drafts of 180 feet are no longer rare. Any bridge with an air draft of 180 feet or less will constrain transits by a number of modern commer- cial vessels. For a port that strives to be- come a hub in the new hub-and-spoke maritime transportation system, the min- imum air draft should be closer to 200 feet, and possibly higher.

Maersk has a design air draft of 191 feet. Other ships in current operation have even greater air drafts. The cruise ship Oasis of the Seas has an air draft of 236 feet. While the current eco- nomic crisis has slowed fleet growth, there is no indication that ships have reached their maximum design size.