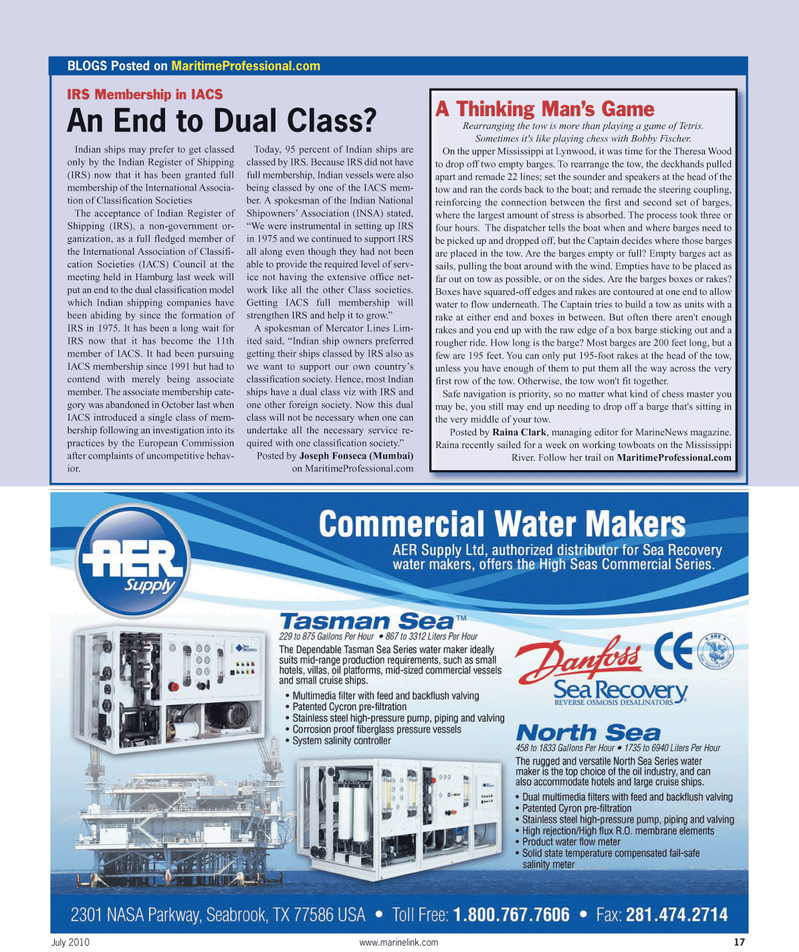 The acceptance of Indian Register of

Shipping (IRS), a non-government or- ganization, as a full fledged member of the International Association of Classifi- cation Societies (IACS) Council at the meeting held in Hamburg last week will put an end to the dual classification model which Indian shipping companies have been abiding by since the formation of

IRS now that it has become the 11th member of IACS. It had been pursuing

IACS introduced a single class of mem- bership following an investigation into its practices by the European Commission after complaints of uncompetitive behav- ior.

Today, 95 percent of Indian ships are classed by IRS. Because IRS did not have full membership, Indian vessels were also being classed by one of the IACS mem- ber. A spokesman of the Indian National

Shipowners’ Association (INSA) stated, “We were instrumental in setting up IRS in 1975 and we continued to support IRS all along even though they had not been able to provide the required level of serv- ice not having the extensive office net- work like all the other Class societies.

Getting IACS full membership will strengthen IRS and help it to grow.”

A spokesman of Mercator Lines Lim- ited said, “Indian ship owners preferred getting their ships classed by IRS also as we want to support our own country’s classification society. Hence, most Indian ships have a dual class viz with IRS and one other foreign society. Now this dual class will not be necessary when one can undertake all the necessary service re- quired with one classification society.”

An End to Dual Class?

Rearranging the tow is more than playing a game of Tetris.

On the upper Mississippi at Lynwood, it was time for the Theresa Wood to drop off two empty barges. To rearrange the tow, the deckhands pulled apart and remade 22 lines; set the sounder and speakers at the head of the tow and ran the cords back to the boat; and remade the steering coupling, reinforcing the connection between the first and second set of barges, where the largest amount of stress is absorbed. The process took three or four hours. The dispatcher tells the boat when and where barges need to be picked up and dropped off, but the Captain decides where those barges are placed in the tow. Are the barges empty or full? Empty barges act as sails, pulling the boat around with the wind. Empties have to be placed as far out on tow as possible, or on the sides. Are the barges boxes or rakes?

Boxes have squared-off edges and rakes are contoured at one end to allow water to flow underneath. The Captain tries to build a tow as units with a rake at either end and boxes in between. But often there aren't enough rakes and you end up with the raw edge of a box barge sticking out and a rougher ride. How long is the barge? Most barges are 200 feet long, but a few are 195 feet. You can only put 195-foot rakes at the head of the tow, unless you have enough of them to put them all the way across the very first row of the tow. Otherwise, the tow won't fit together.

Safe navigation is priority, so no matter what kind of chess master you may be, you still may end up needing to drop off a barge that's sitting in the very middle of your tow.