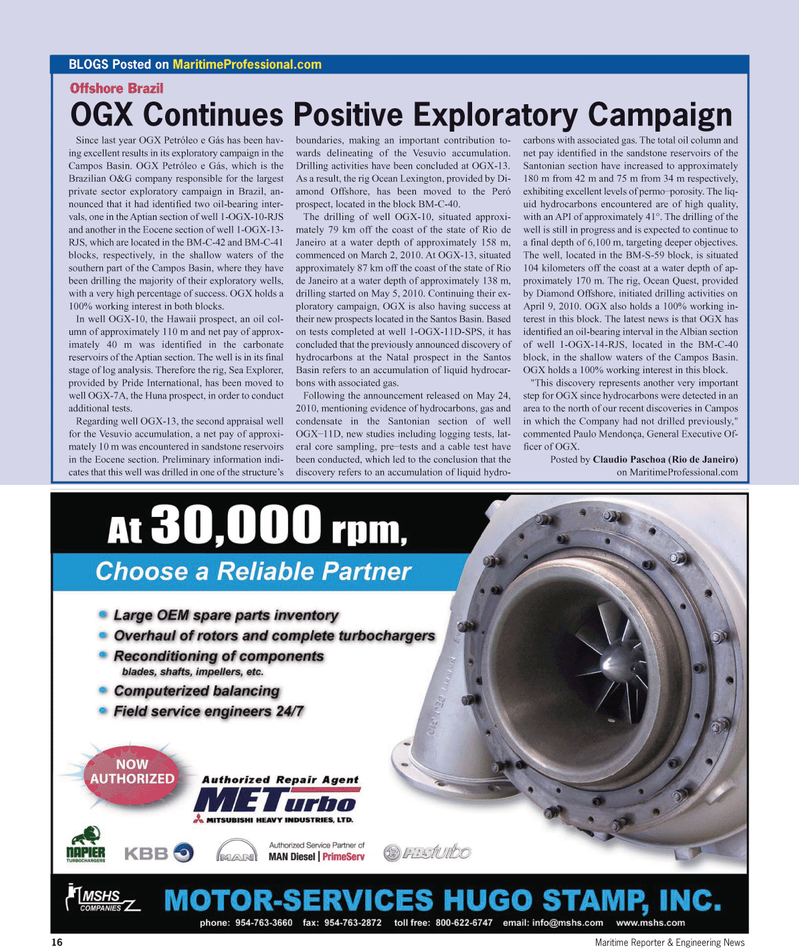 Campos Basin. OGX Petróleo e Gás, which is the

RJS, which are located in the BM-C-42 and BM-C-41 blocks, respectively, in the shallow waters of the southern part of the Campos Basin, where they have been drilling the majority of their exploratory wells, with a very high percentage of success. OGX holds a 100% working interest in both blocks.

In well OGX-10, the Hawaii prospect, an oil col- umn of approximately 110 m and net pay of approx- imately 40 m was identified in the carbonate reservoirs of the Aptian section. The well is in its final stage of log analysis. Therefore the rig, Sea Explorer, provided by Pride International, has been moved to well OGX-7A, the Huna prospect, in order to conduct additional tests.

Regarding well OGX-13, the second appraisal well for the Vesuvio accumulation, a net pay of approxi- mately 10 m was encountered in sandstone reservoirs in the Eocene section. Preliminary information indi- cates that this well was drilled in one of the structure’s boundaries, making an important contribution to- wards delineating of the Vesuvio accumulation.

Drilling activities have been concluded at OGX-13.

As a result, the rig Ocean Lexington, provided by Di- amond Offshore, has been moved to the Peró prospect, located in the block BM-C-40.

The drilling of well OGX-10, situated approxi- mately 79 km off the coast of the state of Rio de

Basin refers to an accumulation of liquid hydrocar- bons with associated gas.

Following the announcement released on May 24, 2010, mentioning evidence of hydrocarbons, gas and condensate in the Santonian section of well

OGXa11D, new studies including logging tests, lat- eral core sampling, preatests and a cable test have been conducted, which led to the conclusion that the discovery refers to an accumulation of liquid hydro- carbons with associated gas. The total oil column and net pay identified in the sandstone reservoirs of the

Santonian section have increased to approximately 180 m from 42 m and 75 m from 34 m respectively, exhibiting excellent levels of permoaporosity. The liq- uid hydrocarbons encountered are of high quality, with an API of approximately 41°. The drilling of the well is still in progress and is expected to continue to a final depth of 6,100 m, targeting deeper objectives.

The well, located in the BM-S-59 block, is situated 104 kilometers off the coast at a water depth of ap- proximately 170 m. The rig, Ocean Quest, provided by Diamond Offshore, initiated drilling activities on

April 9, 2010. OGX also holds a 100% working in- terest in this block. The latest news is that OGX has identified an oil-bearing interval in the Albian section of well 1-OGX-14-RJS, located in the BM-C-40 block, in the shallow waters of the Campos Basin.

OGX holds a 100% working interest in this block. "This discovery represents another very important step for OGX since hydrocarbons were detected in an area to the north of our recent discoveries in Campos in which the Company had not drilled previously," commented Paulo Mendonça, General Executive Of- ficer of OGX.