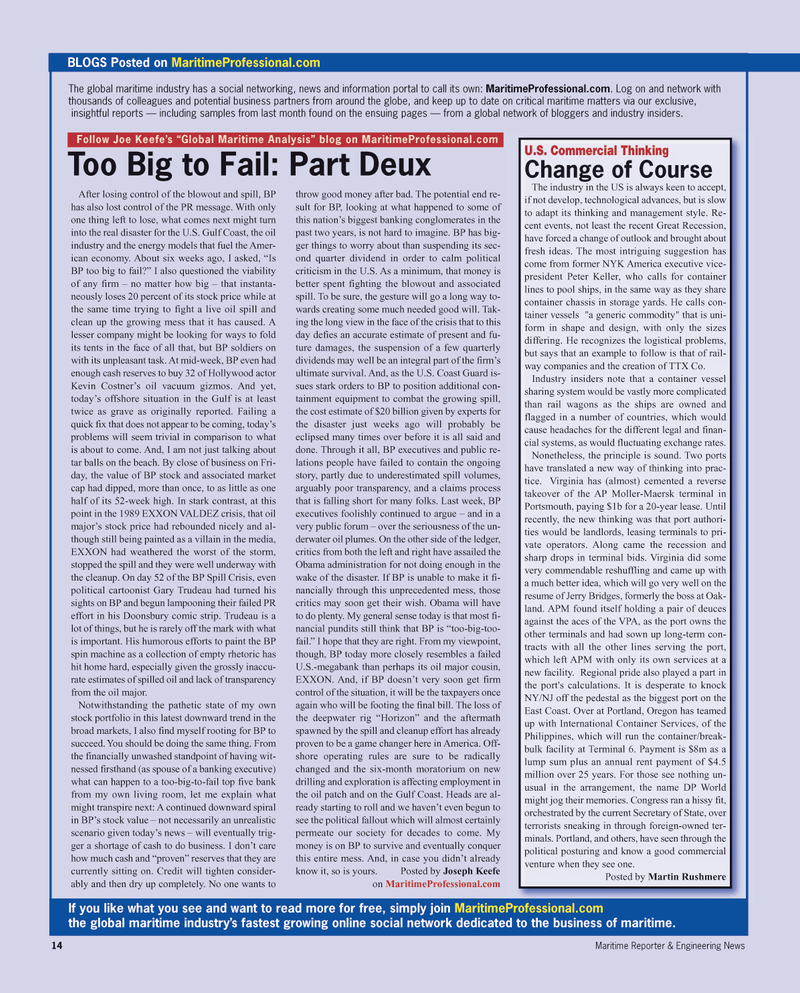 The global maritime industry has a social networking, news and information portal to call its own: MaritimeProfessional.com. Log on and network with thousands of colleagues and potential business partners from around the globe, and keep up to date on critical maritime matters via our exclusive, insightful reports — including samples from last month found on the ensuing pages — from a global network of bloggers and industry insiders.

After losing control of the blowout and spill, BP has also lost control of the PR message. With only one thing left to lose, what comes next might turn into the real disaster for the U.S. Gulf Coast, the oil industry and the energy models that fuel the Amer- ican economy. About six weeks ago, I asked, “Is

BP too big to fail?” I also questioned the viability of any firm – no matter how big – that instanta- neously loses 20 percent of its stock price while at the same time trying to fight a live oil spill and clean up the growing mess that it has caused. A lesser company might be looking for ways to fold its tents in the face of all that, but BP soldiers on with its unpleasant task. At mid-week, BP even had enough cash reserves to buy 32 of Hollywood actor

Kevin Costner’s oil vacuum gizmos. And yet, today’s offshore situation in the Gulf is at least twice as grave as originally reported. Failing a quick fix that does not appear to be coming, today’s problems will seem trivial in comparison to what is about to come. And, I am not just talking about tar balls on the beach. By close of business on Fri- day, the value of BP stock and associated market cap had dipped, more than once, to as little as one half of its 52-week high. In stark contrast, at this point in the 1989 EXXON VALDEZ crisis, that oil major’s stock price had rebounded nicely and al- though still being painted as a villain in the media,

EXXON had weathered the worst of the storm, stopped the spill and they were well underway with the cleanup. On day 52 of the BP Spill Crisis, even political cartoonist Gary Trudeau had turned his sights on BP and begun lampooning their failed PR effort in his Doonsbury comic strip. Trudeau is a lot of things, but he is rarely off the mark with what is important. His humorous efforts to paint the BP spin machine as a collection of empty rhetoric has hit home hard, especially given the grossly inaccu- rate estimates of spilled oil and lack of transparency from the oil major.

Notwithstanding the pathetic state of my own stock portfolio in this latest downward trend in the broad markets, I also find myself rooting for BP to succeed. You should be doing the same thing. From the financially unwashed standpoint of having wit- nessed firsthand (as spouse of a banking executive) what can happen to a too-big-to-fail top five bank from my own living room, let me explain what might transpire next: A continued downward spiral in BP’s stock value – not necessarily an unrealistic scenario given today’s news – will eventually trig- ger a shortage of cash to do business. I don’t care how much cash and “proven” reserves that they are currently sitting on. Credit will tighten consider- ably and then dry up completely. No one wants to throw good money after bad. The potential end re- sult for BP, looking at what happened to some of this nation’s biggest banking conglomerates in the past two years, is not hard to imagine. BP has big- ger things to worry about than suspending its sec- ond quarter dividend in order to calm political criticism in the U.S. As a minimum, that money is better spent fighting the blowout and associated spill. To be sure, the gesture will go a long way to- wards creating some much needed good will. Tak- ing the long view in the face of the crisis that to this day defies an accurate estimate of present and fu- ture damages, the suspension of a few quarterly dividends may well be an integral part of the firm’s ultimate survival. And, as the U.S. Coast Guard is- sues stark orders to BP to position additional con- tainment equipment to combat the growing spill, the cost estimate of $20 billion given by experts for the disaster just weeks ago will probably be eclipsed many times over before it is all said and done. Through it all, BP executives and public re- lations people have failed to contain the ongoing story, partly due to underestimated spill volumes, arguably poor transparency, and a claims process that is falling short for many folks. Last week, BP executives foolishly continued to argue – and in a very public forum – over the seriousness of the un- derwater oil plumes. On the other side of the ledger, critics from both the left and right have assailed the

Obama administration for not doing enough in the wake of the disaster. If BP is unable to make it fi- nancially through this unprecedented mess, those critics may soon get their wish. Obama will have to do plenty. My general sense today is that most fi- nancial pundits still think that BP is “too-big-too- fail.” I hope that they are right. From my viewpoint, though, BP today more closely resembles a failed

EXXON. And, if BP doesn’t very soon get firm control of the situation, it will be the taxpayers once again who will be footing the final bill. The loss of the deepwater rig “Horizon” and the aftermath spawned by the spill and cleanup effort has already proven to be a game changer here in America. Off- shore operating rules are sure to be radically changed and the six-month moratorium on new drilling and exploration is affecting employment in the oil patch and on the Gulf Coast. Heads are al- ready starting to roll and we haven’t even begun to see the political fallout which will almost certainly permeate our society for decades to come. My money is on BP to survive and eventually conquer this entire mess. And, in case you didn’t already know it, so is yours. Posted by Joseph Keefe on MaritimeProfessional.com

If you like what you see and want to read more for free, simply join MaritimeProfessional.com the global maritime industry’s fastest growing online social network dedicated to the business of maritime.

The industry in the US is always keen to accept, if not develop, technological advances, but is slow to adapt its thinking and management style. Re- cent events, not least the recent Great Recession, have forced a change of outlook and brought about fresh ideas. The most intriguing suggestion has come from former NYK America executive vice- president Peter Keller, who calls for container lines to pool ships, in the same way as they share container chassis in storage yards. He calls con- tainer vessels "a generic commodity" that is uni- form in shape and design, with only the sizes differing. He recognizes the logistical problems, but says that an example to follow is that of rail- way companies and the creation of TTX Co.

Industry insiders note that a container vessel sharing system would be vastly more complicated than rail wagons as the ships are owned and flagged in a number of countries, which would cause headaches for the different legal and finan- cial systems, as would fluctuating exchange rates.

Nonetheless, the principle is sound. Two ports have translated a new way of thinking into prac- tice. Virginia has (almost) cemented a reverse takeover of the AP Moller-Maersk terminal in

Portsmouth, paying $1b for a 20-year lease. Until recently, the new thinking was that port authori- ties would be landlords, leasing terminals to pri- vate operators. Along came the recession and sharp drops in terminal bids. Virginia did some very commendable reshuffling and came up with a much better idea, which will go very well on the resume of Jerry Bridges, formerly the boss at Oak- land. APM found itself holding a pair of deuces against the aces of the VPA, as the port owns the other terminals and had sown up long-term con- tracts with all the other lines serving the port, which left APM with only its own services at a new facility. Regional pride also played a part in the port's calculations. It is desperate to knock

NY/NJ off the pedestal as the biggest port on the

East Coast. Over at Portland, Oregon has teamed up with International Container Services, of the

Philippines, which will run the container/break- bulk facility at Terminal 6. Payment is $8m as a lump sum plus an annual rent payment of $4.5 million over 25 years. For those see nothing un- usual in the arrangement, the name DP World might jog their memories. Congress ran a hissy fit, orchestrated by the current Secretary of State, over terrorists sneaking in through foreign-owned ter- minals. Portland, and others, have seen through the political posturing and know a good commercial venture when they see one.

Too Big to Fail: Part Deux