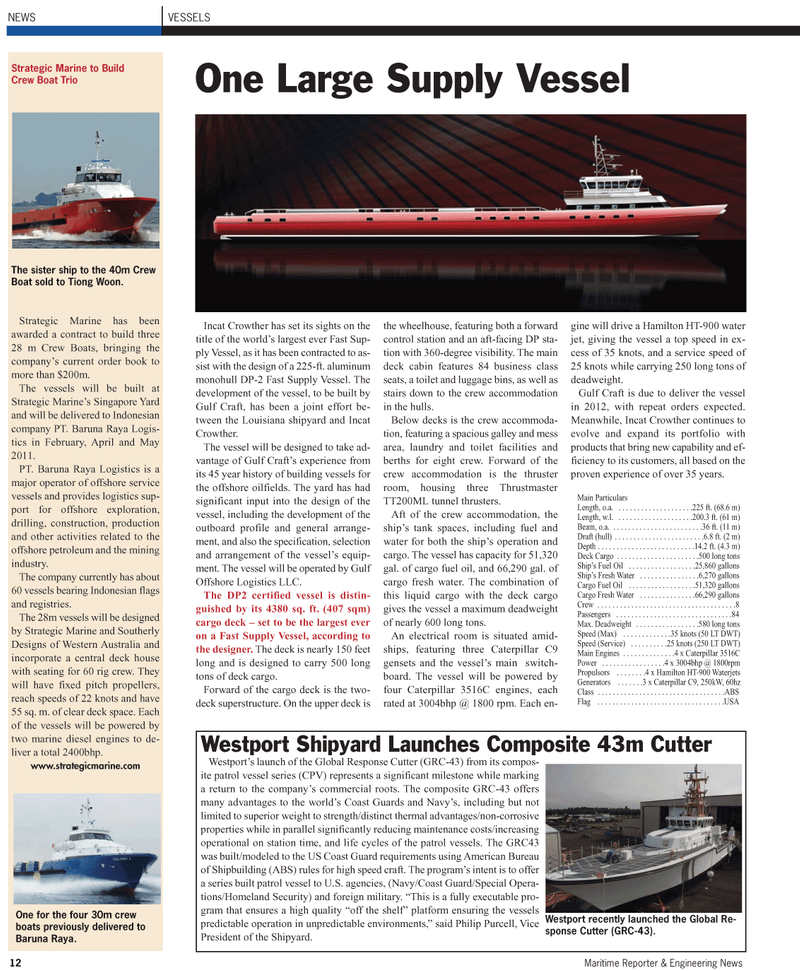 Incat Crowther has set its sights on the title of the world’s largest ever Fast Sup- ply Vessel, as it has been contracted to as- sist with the design of a 225-ft. aluminum monohull DP-2 Fast Supply Vessel. The development of the vessel, to be built by

Gulf Craft, has been a joint effort be- tween the Louisiana shipyard and Incat

The vessel will be designed to take ad- vantage of Gulf Craft’s experience from its 45 year history of building vessels for the offshore oilfields. The yard has had significant input into the design of the vessel, including the development of the outboard profile and general arrange- ment, and also the specification, selection and arrangement of the vessel’s equip- ment. The vessel will be operated by Gulf

The DP2 certified vessel is distin- guished by its 4380 sq. ft. (407 sqm) cargo deck – set to be the largest ever on a Fast Supply Vessel, according to the designer. The deck is nearly 150 feet long and is designed to carry 500 long tons of deck cargo.

Forward of the cargo deck is the two- deck superstructure. On the upper deck is the wheelhouse, featuring both a forward control station and an aft-facing DP sta- tion with 360-degree visibility. The main deck cabin features 84 business class seats, a toilet and luggage bins, as well as stairs down to the crew accommodation in the hulls.

Below decks is the crew accommoda- tion, featuring a spacious galley and mess area, laundry and toilet facilities and berths for eight crew. Forward of the crew accommodation is the thruster room, housing three Thrustmaster

Aft of the crew accommodation, the ship’s tank spaces, including fuel and water for both the ship’s operation and cargo. The vessel has capacity for 51,320 gal. of cargo fuel oil, and 66,290 gal. of cargo fresh water. The combination of this liquid cargo with the deck cargo gives the vessel a maximum deadweight of nearly 600 long tons.

An electrical room is situated amid- ships, featuring three Caterpillar C9 gensets and the vessel’s main switch- board. The vessel will be powered by four Caterpillar 3516C engines, each rated at 3004bhp @ 1800 rpm. Each en- gine will drive a Hamilton HT-900 water jet, giving the vessel a top speed in ex- cess of 35 knots, and a service speed of 25 knots while carrying 250 long tons of deadweight.

Gulf Craft is due to deliver the vessel in 2012, with repeat orders expected.

Meanwhile, Incat Crowther continues to evolve and expand its portfolio with products that bring new capability and ef- ficiency to its customers, all based on the proven experience of over 35 years.

The sister ship to the 40m Crew

Strategic Marine has been awarded a contract to build three 28 m Crew Boats, bringing the company’s current order book to more than $200m.

The vessels will be built at

Strategic Marine’s Singapore Yard and will be delivered to Indonesian company PT. Baruna Raya Logis- tics in February, April and May 2011.

PT. Baruna Raya Logistics is a major operator of offshore service vessels and provides logistics sup- port for offshore exploration, drilling, construction, production and other activities related to the offshore petroleum and the mining industry.

The company currently has about 60 vessels bearing Indonesian flags and registries.

The 28m vessels will be designed by Strategic Marine and Southerly

Designs of Western Australia and incorporate a central deck house with seating for 60 rig crew. They will have fixed pitch propellers, reach speeds of 22 knots and have 55 sq. m. of clear deck space. Each of the vessels will be powered by two marine diesel engines to de- liver a total 2400bhp. www.strategicmarine.com

Westport’s launch of the Global Response Cutter (GRC-43) from its compos- ite patrol vessel series (CPV) represents a significant milestone while marking a return to the company’s commercial roots. The composite GRC-43 offers many advantages to the world’s Coast Guards and Navy’s, including but not limited to superior weight to strength/distinct thermal advantages/non-corrosive properties while in parallel significantly reducing maintenance costs/increasing operational on station time, and life cycles of the patrol vessels. The GRC43 was built/modeled to the US Coast Guard requirements using American Bureau of Shipbuilding (ABS) rules for high speed craft. The program’s intent is to offer a series built patrol vessel to U.S. agencies, (Navy/Coast Guard/Special Opera- tions/Homeland Security) and foreign military. “This is a fully executable pro- gram that ensures a high quality “off the shelf” platform ensuring the vessels predictable operation in unpredictable environments,” said Philip Purcell, Vice

President of the Shipyard.

One for the four 30m crew boats previously delivered to