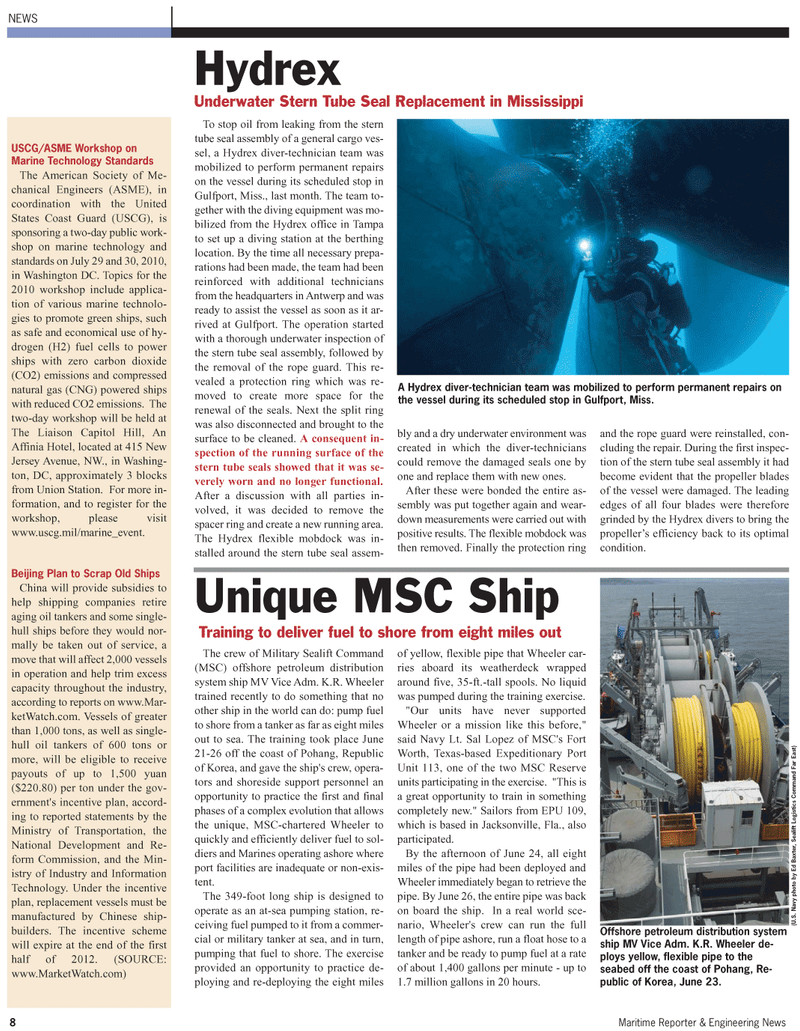 The American Society of Me- chanical Engineers (ASME), in coordination with the United

States Coast Guard (USCG), is sponsoring a two-day public work- shop on marine technology and standards on July 29 and 30, 2010, in Washington DC. Topics for the 2010 workshop include applica- tion of various marine technolo- gies to promote green ships, such as safe and economical use of hy- drogen (H2) fuel cells to power ships with zero carbon dioxide (CO2) emissions and compressed natural gas (CNG) powered ships with reduced CO2 emissions. The two-day workshop will be held at

The Liaison Capitol Hill, An

Jersey Avenue, NW., in Washing- ton, DC, approximately 3 blocks from Union Station. For more in- formation, and to register for the workshop, please visit www.uscg.mil/marine_event.

China will provide subsidies to help shipping companies retire aging oil tankers and some single- hull ships before they would nor- mally be taken out of service, a move that will affect 2,000 vessels in operation and help trim excess capacity throughout the industry, according to reports on www.Mar- ketWatch.com. Vessels of greater than 1,000 tons, as well as single- hull oil tankers of 600 tons or more, will be eligible to receive payouts of up to 1,500 yuan ($220.80) per ton under the gov- ernment's incentive plan, accord- ing to reported statements by the

Ministry of Transportation, the

National Development and Re- form Commission, and the Min- istry of Industry and Information

Technology. Under the incentive plan, replacement vessels must be manufactured by Chinese ship- builders. The incentive scheme will expire at the end of the first half of 2012. (SOURCE: www.MarketWatch.com)

To stop oil from leaking from the stern tube seal assembly of a general cargo ves- sel, a Hydrex diver-technician team was mobilized to perform permanent repairs on the vessel during its scheduled stop in

Gulfport, Miss., last month. The team to- gether with the diving equipment was mo- bilized from the Hydrex office in Tampa to set up a diving station at the berthing location. By the time all necessary prepa- rations had been made, the team had been reinforced with additional technicians from the headquarters in Antwerp and was ready to assist the vessel as soon as it ar- rived at Gulfport. The operation started with a thorough underwater inspection of the stern tube seal assembly, followed by the removal of the rope guard. This re- vealed a protection ring which was re- moved to create more space for the renewal of the seals. Next the split ring was also disconnected and brought to the surface to be cleaned. A consequent in- spection of the running surface of the stern tube seals showed that it was se- verely worn and no longer functional.

After a discussion with all parties in- volved, it was decided to remove the spacer ring and create a new running area.

The Hydrex flexible mobdock was in- stalled around the stern tube seal assem- bly and a dry underwater environment was created in which the diver-technicians could remove the damaged seals one by one and replace them with new ones.

After these were bonded the entire as- sembly was put together again and wear- down measurements were carried out with positive results. The flexible mobdock was then removed. Finally the protection ring and the rope guard were reinstalled, con- cluding the repair. During the first inspec- tion of the stern tube seal assembly it had become evident that the propeller blades of the vessel were damaged. The leading edges of all four blades were therefore grinded by the Hydrex divers to bring the propeller’s efficiency back to its optimal condition.

A Hydrex diver-technician team was mobilized to perform permanent repairs on the vessel during its scheduled stop in Gulfport, Miss.

The crew of Military Sealift Command (MSC) offshore petroleum distribution system ship MV Vice Adm. K.R. Wheeler trained recently to do something that no other ship in the world can do: pump fuel to shore from a tanker as far as eight miles out to sea. The training took place June 21-26 off the coast of Pohang, Republic of Korea, and gave the ship's crew, opera- tors and shoreside support personnel an opportunity to practice the first and final phases of a complex evolution that allows the unique, MSC-chartered Wheeler to quickly and efficiently deliver fuel to sol- diers and Marines operating ashore where port facilities are inadequate or non-exis- tent.

The 349-foot long ship is designed to operate as an at-sea pumping station, re- ceiving fuel pumped to it from a commer- cial or military tanker at sea, and in turn, pumping that fuel to shore. The exercise provided an opportunity to practice de- ploying and re-deploying the eight miles of yellow, flexible pipe that Wheeler car- ries aboard its weatherdeck wrapped around five, 35-ft.-tall spools. No liquid was pumped during the training exercise. "Our units have never supported

Wheeler or a mission like this before," said Navy Lt. Sal Lopez of MSC's Fort

Unit 113, one of the two MSC Reserve units participating in the exercise. "This is a great opportunity to train in something completely new." Sailors from EPU 109, which is based in Jacksonville, Fla., also participated.

By the afternoon of June 24, all eight miles of the pipe had been deployed and

Wheeler immediately began to retrieve the pipe. By June 26, the entire pipe was back on board the ship. In a real world sce- nario, Wheeler's crew can run the full length of pipe ashore, run a float hose to a tanker and be ready to pump fuel at a rate of about 1,400 gallons per minute - up to 1.7 million gallons in 20 hours.

Training to deliver fuel to shore from eight miles out