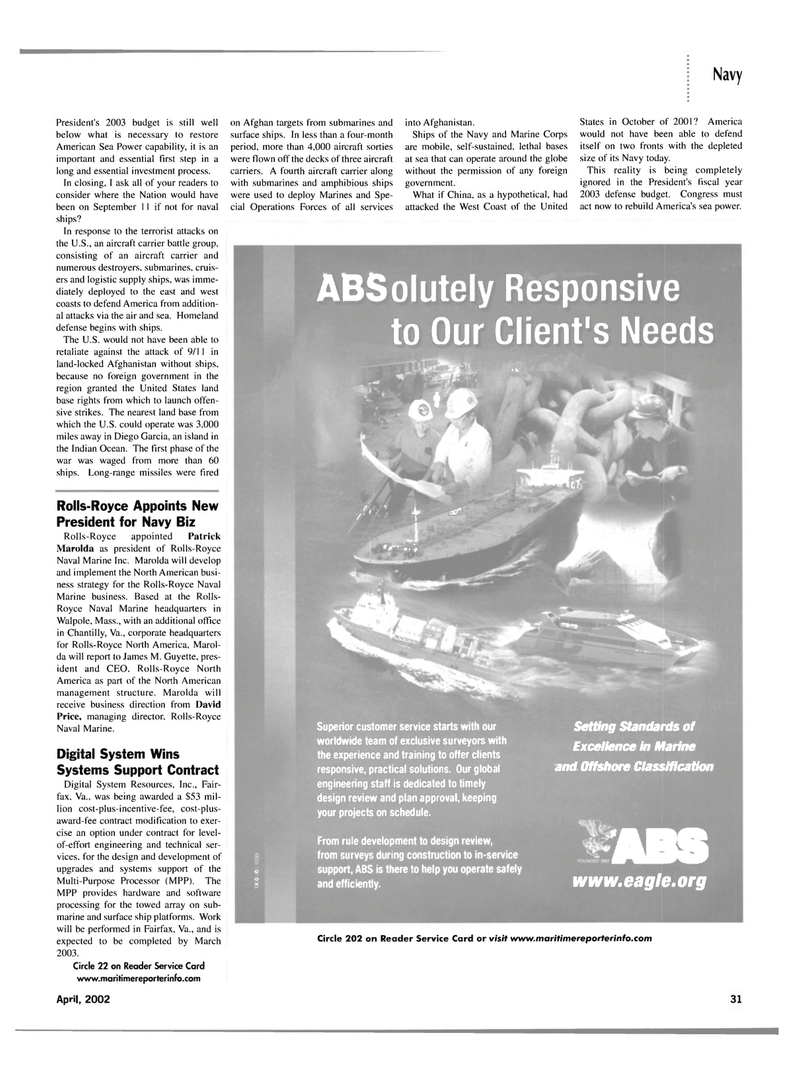 In closing, I ask all of your readers to consider where the Nation would have been on September 11 if not for naval ships?

In response to the terrorist attacks on the U.S., an aircraft carrier battle group, consisting of an aircraft carrier and numerous destroyers, submarines, cruis- ers and logistic supply ships, was imme- diately deployed to the east and west coasts to defend America from addition- al attacks via the air and sea. Homeland defense begins with ships.

The U.S. would not have been able to retaliate against the attack of 9/11 in land-locked Afghanistan without ships, because no foreign government in the region granted the United States land base rights from which to launch offen- sive strikes. The nearest land base from which the U.S. could operate was 3,000 miles away in Diego Garcia, an island in the Indian Ocean. The first phase of the war was waged from more than 60 ships. Long-range missiles were fired

Marolda as president of Rolls-Royce

Marine business. Based at the Rolls-

America as part of the North American management structure. Marolda will receive business direction from David

Digital System Resources, Inc., Fair- fax, Va., was being awarded a $53 mil- lion cost-plus-incentive-fee, cost-plus- award-fee contract modification to exer- cise an option under contract for level- of-effort engineering and technical ser- vices, for the design and development of upgrades and systems support of the

MPP provides hardware and software processing for the towed array on sub- marine and surface ship platforms. Work will be performed in Fairfax, Va., and is expected to be completed by March 2003.

Circle 22 on Reader Service Card www.maritimereporterinfo.com on Afghan targets from submarines and surface ships. In less than a four-month period, more than 4.000 aircraft sorties were flown off the decks of three aircraft carriers. A fourth aircraft carrier along with submarines and amphibious ships were used to deploy Marines and Spe- cial Operations Forces of all services

Ships of the Navy and Marine Corps are mobile, self-sustained, lethal bases at sea that can operate around the globe without the permission of any foreign government.

What if China, as a hypothetical, had attacked the West Coast of the United

States in October of 2001? America would not have been able to defend itself on two fronts with the depleted size of its Navy today.

This reality is being completely ignored in the President's fiscal year 2003 defense budget. Congress must act now to rebuild America's sea power.

Superior customer service starts with our worldwide team of exclusive surveyors with the experience and training to offer clients responsive, practical solutions. Our global engineering staff is dedicated to timely design review and plan approval, keeping your projects on schedule.

From rule development to design review, from surveys during construction to in-service support, ABS is there to help you operate safely and efficiently. it

Excellence in Marine and Offshore Classification