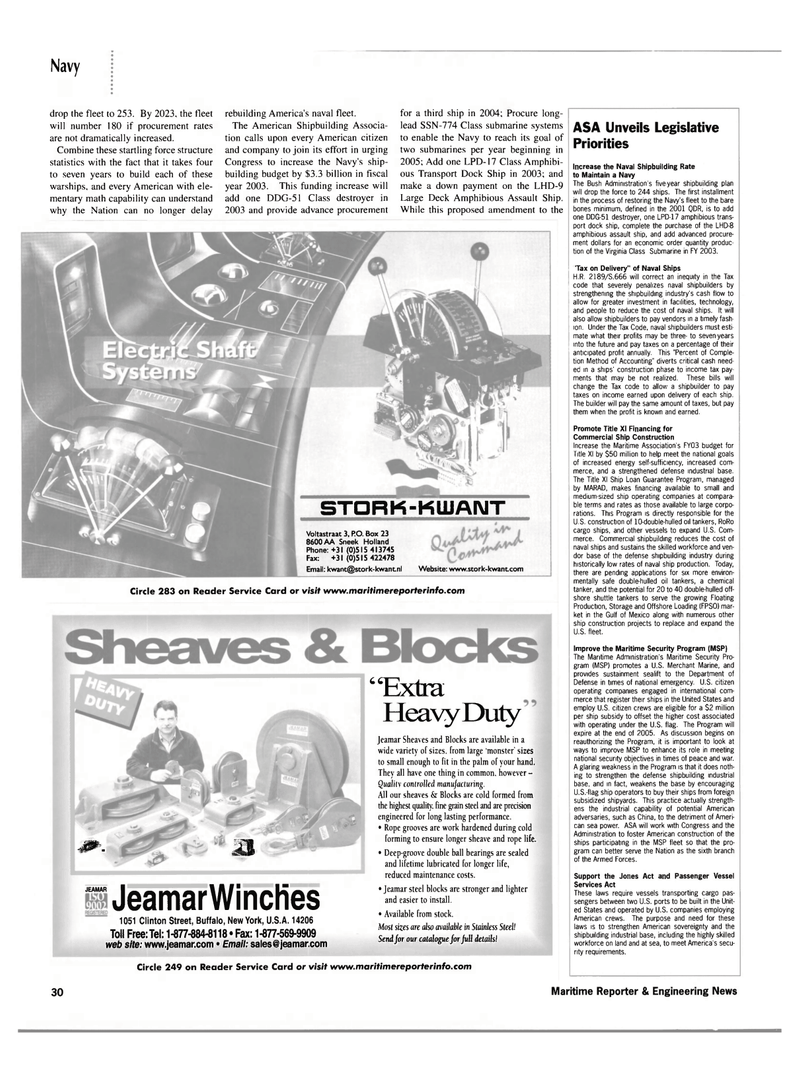 Navy drop the fleet to 253. By 2023, the fleet will number 180 if procurement rates are not dramatically increased.

Combine these startling force structure statistics with the fact that it takes four to seven years to build each of these warships, and every American with ele- mentary math capability can understand why the Nation can no longer delay rebuilding America's naval fleet.

Congress to increase the Navy's ship- building budget by $3.3 billion in fiscal year 2003. This funding increase will add one DDG-51 Class destroyer in 2003 and provide advance procurement for a third ship in 2004; Procure long- lead SSN-774 Class submarine systems to enable the Navy to reach its goal of two submarines per year beginning in 2005; Add one LPD-17 Class Amphibi- ous Transport Dock Ship in 2003; and make a down payment on the LHD-9

While this proposed amendment to the

Jeamar Sheaves and Blocks are available in a wide variety of sizes, from large 'monster' sizes to small enough to fit in the palm of your hand.

They all have one thing in common, however -

All our sheaves & Blocks are cold formed from the highest quality, fine grain steel and are precision engineered for long lasting performance. • Rope grooves are work hardened during cold forming to ensure longer sheave and rope life. • Deep-groove double ball bearings are sealed and lifetime lubricated for longer life, reduced maintenance costs. • Jeamar steel blocks are stronger and lighter and easier to install. • Available from stock.

Most sizes are also available in Stainless Steel!

Send for our catalogue for full details!

Increase the Naval Shipbuilding Rate to Maintain a Navy

The Bush Administration's five-year shipbuilding plan will drop the force to 244 ships. The first installment in the process of restoring the Navy's fleet to the bare bones minimum, defined in the 2001 QDR, is to add one DDG-51 destroyer, one LPD-17 amphibious trans- port dock ship, complete the purchase of the LHD-8 amphibious assault ship, and add advanced procure- ment dollars for an economic order quantity produc- tion of the Virginia Class Submarine in FY 2003. "Tax on Delivery" of Naval Ships

H.R. 2189/S.666 will correct an inequity in the Tax code that severely penalizes naval shipbuilders by strengthening the shipbuilding industry's cash flow to allow for greater investment in facilities, technology, and people to reduce the cost of naval ships. It will also allow shipbuilders to pay vendors in a timely fash- ion. Under the Tax Code, naval shipbuilders must esti- mate what their profits may be three- to seven-years into the future and pay taxes on a percentage of their anticipated profit annually. This "Percent of Comple- tion Method of Accounting" diverts critical cash need- ed in a ships' construction phase to income tax pay- ments that may be not realized. These bills will change the Tax code to ailov/ a shipbuilder to pay taxes on income earned upon delivery of each ship.

The builder will pay the same amount of taxes, but pay them when the profit is known and earned.

Title XI by $50 million to help meet the national goals of increased energy self-sufficiency, increased com- merce, and a strengthened defense industrial base.

The Title XI Ship Loan Guarantee Program, managed by MARAD, makes financing available to small and medium-sized ship operating companies at compara- ble terms and rates as those available to large corpo- rations. This Program is directly responsible for the

U.S. construction of 10-double-hulled oil tankers, RoRo cargo ships, and other vessels to expand U.S. Com- merce. Commercial shipbuilding reduces the cost of naval ships and sustains the skilled workforce and ven- dor base of the defense shipbuilding industry during historically low rates of naval ship production. Today, there are pending applications for six more environ- mentally safe double-hulled oil tankers, a chemical tanker, and the potential for 20 to 40 double-hulled off- shore shuttle tankers to serve the growing Floating

Production, Storage and Offshore Loading (FPSO) mar- ket in the Gulf of Mexico along with numerous other ship construction projects to replace and expand the

Defense in times of national emergency. U.S. citizen operating companies engaged in international com- merce that register their ships in the United States and employ U.S. citizen crews are eligible for a $2 million per ship subsidy to offset the higher cost associated with operating under the U.S. flag. The Program will expire at the end of 2005. As discussion begins on reauthorizing the Program, it is important to look at ways to improve MSP to enhance its role in meeting national security objectives in times of peace and war.

A glaring weakness in the Program is that it does noth- ing to strengthen the defense shipbuilding industrial base, and in fact, weakens the base by encouraging

U.S.-flag ship operators to buy their ships from foreign subsidized shipyards. This practice actually strength- ens the industrial capability of potential American adversaries, such as China, to the detriment of Ameri- can sea power. ASA will work with Congress and the

Administration to foster American construction of the ships participating in the MSP fleet so that the pro- gram can better serve the Nation as the sixth branch of the Armed Forces.

These laws require vessels transporting cargo pas- sengers between two U.S. ports to be built in the Unit- ed States and operated by U.S. companies employing

American crews. The purpose and need for these laws is to strengthen American sovereignty and the shipbuilding industrial base, including the highly skilled workforce on land and at sea, to meet America's secu- rity requirements. 30 Maritime Reporter & Engineering News