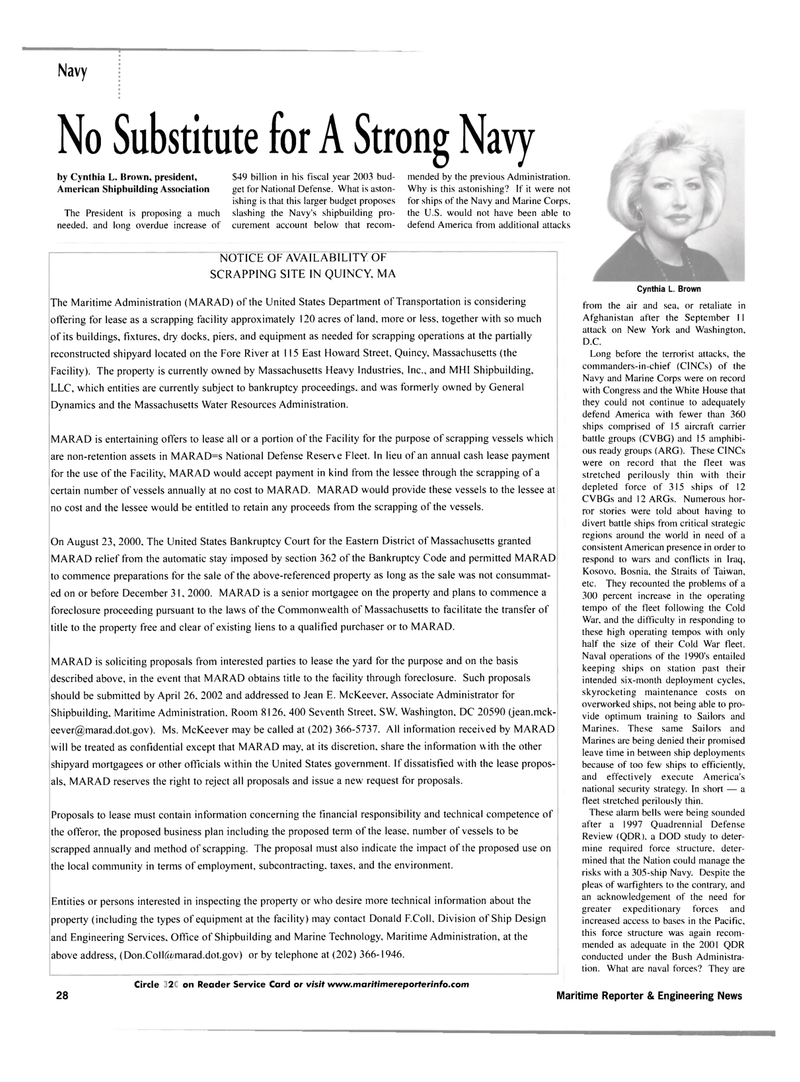 No Substitute for A Strong Navy by Cynthia L. Brown, president,

The President is proposing a much needed, and long overdue increase of $49 billion in his fiscal year 2003 bud- get for National Defense. What is aston- ishing is that this larger budget proposes slashing the Navy's shipbuilding pro- curement account below that recom- mended by the previous Administration.

Why is this astonishing? If it were not for ships of the Navy and Marine Corps, the U.S. would not have been able to defend America from additional attacks

NOTICE OF AVAILABILITY OF

The Maritime Administration (MARAD) of the United States Department of Transportation is considering offering for lease as a scrapping facility approximately 120 acres of land, more or less, together with so much of its buildings, fixtures, dry docks, piers, and equipment as needed for scrapping operations at the partially reconstructed shipyard located on the Fore River at 115 East Howard Street, Quincy, Massachusetts (the

LLC, which entities are currently subject to bankruptcy proceedings, and was formerly owned by General

MARAD is entertaining offers to lease all or a portion of the Facility for the purpose of scrapping vessels which are non-retention assets in MARAD=s National Defense Reserve Fleet. In lieu of an annual cash lease payment for the use of the Facility, MARAD would accept payment in kind from the lessee through the scrapping of a certain number of vessels annually at no cost to MARAD. MARAD would provide these vessels to the lessee at no cost and the lessee would be entitled to retain any proceeds from the scrapping of the vessels.

On August 23, 2000, The United States Bankruptcy Court for the Eastern District of Massachusetts granted

MARAD relief from the automatic stay imposed by section 362 of the Bankruptcy Code and permitted MARAD to commence preparations for the sale of the above-referenced property as long as the sale was not consummat- ed on or before December 31, 2000. MARAD is a senior mortgagee on the property and plans to commence a foreclosure proceeding pursuant to the laws of the Commonwealth of Massachusetts to facilitate the transfer of title to the property free and clear of existing liens to a qualified purchaser or to MARAD.

MARAD is soliciting proposals from interested parties to lease the yard for the purpose and on the basis described above, in the event that MARAD obtains title to the facility through foreclosure. Such proposals should be submitted by April 26, 2002 and addressed to Jean E. McKeever, Associate Administrator for

Shipbuilding, Maritime Administration, Room 8126. 400 Seventh Street. SW. Washington, DC 20590 (jean.mck- eever@marad.dot.gov). Ms. McKeever may be called at (202) 366-5737. All information received by MARAD will be treated as confidential except that MARAD may, at its discretion, share the information with the other shipyard mortgagees or other officials w ithin the United States government. If dissatisfied with the lease propos- als, MARAD reserves the right to reject all proposals and issue a new request for proposals.

Proposals to lease must contain information concerning the financial responsibility and technical competence of the offeror, the proposed business plan including the proposed term of the lease, number of vessels to be scrapped annually and method of scrapping. The proposal must also indicate the impact of the proposed use on the local community in terms of employment, subcontracting, taxes, and the environment.

Entities or persons interested in inspecting the property or who desire more technical information about the property (including the types of equipment at the facility) may contact Donald F.Coll. Division of Ship Design and Engineering Services, Office of Shipbuilding and Marine Technology, Maritime Administration, at the above address, (Don.ColLrmarad.dot.gov) or by telephone at (202) 366-1946.

Cynthia L. Brown from the air and sea, or retaliate in

Afghanistan after the September 11 attack on New York and Washington,

Long before the terrorist attacks, the commanders-in-chief (CINCs) of the

Navy and Marine Corps were on record with Congress and the White House that they could not continue to adequately defend America with fewer than 360 ships comprised of 15 aircraft carrier battle groups (CVBG) and 15 amphibi- ous ready groups (ARG). These CINCs were on record that the fleet was stretched perilously thin with their depleted force of 315 ships of 12

CVBGs and 12 ARGs. Numerous hor- ror stories were told about having to divert battle ships from critical strategic regions around the world in need of a consistent American presence in order to respond to wars and conflicts in Iraq,

Kosovo, Bosnia, the Straits of Taiwan, etc. They recounted the problems of a 300 percent increase in the operating tempo of the fleet following the Cold

War, and the difficulty in responding to these high operating tempos with only half the size of their Cold War fleet.

Naval operations of the 1990's entailed keeping ships on station past their intended six-month deployment cycles, skyrocketing maintenance costs on overworked ships, not being able to pro- vide optimum training to Sailors and

Marines. These same Sailors and

Marines are being denied their promised leave time in between ship deployments because of too few ships to efficiently, and effectively execute America's national security strategy. In short — a fleet stretched perilously thin.

These alarm bells were being sounded after a 1997 Quadrennial Defense

Review (QDR), a DOD study to deter- mine required force structure, deter- mined that the Nation could manage the risks with a 305-ship Navy. Despite the pleas of warfighters to the contrary, and an acknowledgement of the need for greater expeditionary forces and increased access to bases in the Pacific, this force structure was again recom- mended as adequate in the 2001 QDR conducted under the Bush Administra- tion. What are naval forces? They are 28