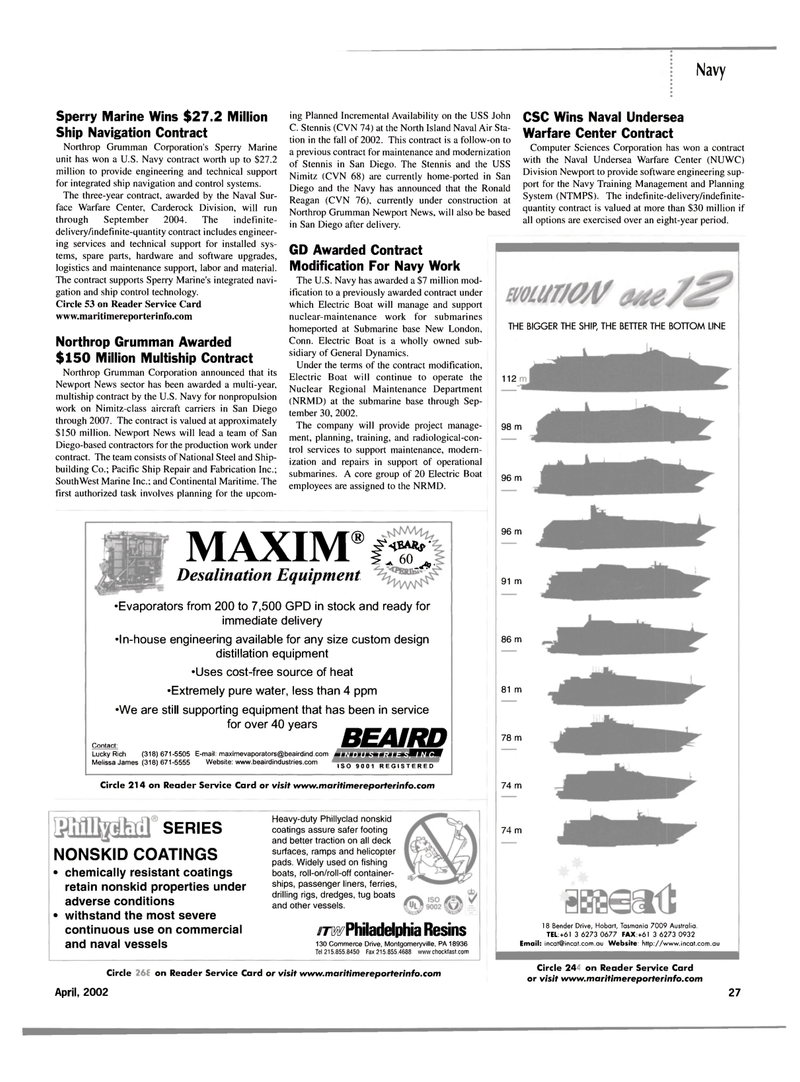 Northrop Grumman Corporation's Sperry Marine unit has won a U.S. Navy contract worth up to $27.2 million to provide engineering and technical support for integrated ship navigation and control systems.

Northrop Grumman Corporation announced that its

Newport News sector has been awarded a multi-year, multiship contract by the U.S. Navy for nonpropulsion work on Nimitz-class aircraft carriers in San Diego through 2007. The contract is valued at approximately $150 million. Newport News will lead a team of San

C. Stennis (CVN 74) at the North Island Naval Air Sta- tion in the fall of 2002. This contract is a follow-on to a previous contract for maintenance and modernization of Stennis in San Diego. The Stennis and the USS

Diego and the Navy has announced that the Ronald

Reagan (CVN 76), currently under construction at

Northrop Grumman Newport News, will also be based in San Diego after delivery.

The U.S. Navy has awarded a $7 million mod- ification to a previously awarded contract under which Electric Boat will manage and support nuclear-maintenance work for submarines homeported at Submarine base New London,

Electric Boat will continue to operate the

Nuclear Regional Maintenance Department (NRMD) at the submarine base through Sep- tember 30, 2002.

The company will provide project manage- ment, planning, training, and radiological-con- trol services to support maintenance, modern- ization and repairs in support of operational submarines. A core group of 20 Electric Boat employees are assigned to the NRMD.

System (NTMPS). The indefinite-delivery/indefinite- quantity contract is valued at more than $30 million if all options are exercised over an eight-year period.

Desalination Equipment •Evaporators from 200 to 7,500 GPD in stock and ready for immediate delivery •In-house engineering available for any size custom design distillation equipment •Uses cost-free source of heat •Extremely pure water, less than 4 ppm •We are still supporting equipment that has been in service for over 40 years BEAIRD