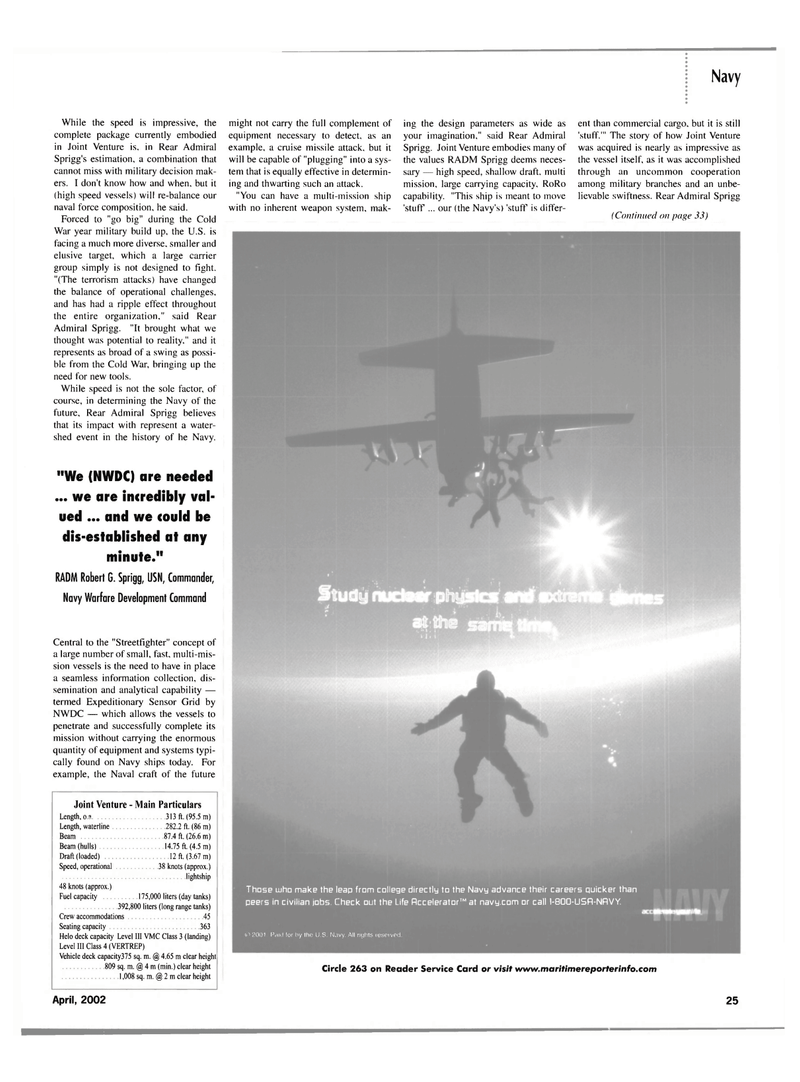 While the speed is impressive, the complete package currently embodied in Joint Venture is. in Rear Admiral

Sprigg's estimation, a combination that cannot miss with military decision mak- ers. I don't know how and when, but it (high speed vessels) will re-balance our naval force composition, he said.

Forced to "go big" during the Cold

War year military build up, the U.S. is facing a much more diverse, smaller and elusive target, which a large carrier group simply is not designed to fight. "(The terrorism attacks) have changed the balance of operational challenges, and has had a ripple effect throughout the entire organization," said Rear

Admiral Sprigg. "It brought what we thought was potential to reality," and it represents as broad of a swing as possi- ble from the Cold War, bringing up the need for new tools.

While speed is not the sole factor, of course, in determining the Navy of the future. Rear Admiral Sprigg believes that its impact with represent a water- shed event in the history of he Navy. "We (NWDC) are needed ... we are incredibly val- ued ... and we could be dis-established at any minute."

Central to the "Streetfighter" concept of a large number of small, fast, multi-mis- sion vessels is the need to have in place a seamless information collection, dis- semination and analytical capability — termed Expeditionary Sensor Grid by

NWDC — which allows the vessels to penetrate and successfully complete its mission without carrying the enormous quantity of equipment and systems typi- cally found on Navy ships today. For example, the Naval craft of the future might not carry the full complement of equipment necessary to detect, as an example, a cruise missile attack, but it will be capable of "plugging" into a sys- tem that is equally effective in determin- ing and thwarting such an attack. "You can have a multi-mission ship with no inherent weapon system, mak- ing the design parameters as wide as your imagination," said Rear Admiral

Sprigg. Joint Venture embodies many of the values RADM Sprigg deems neces- sary — high speed, shallow draft, multi mission, large carrying capacity, RoRo capability. "This ship is meant to move 'stuff ... our (the Navy's) 'stuff is differ- ent than commercial cargo, but it is still 'stuff.'" The story of how Joint Venture was acquired is nearly as impressive as the vessel itself, as it was accomplished through an uncommon cooperation among military branches and an unbe- lievable swiftness. Rear Admiral Sprigg (Continued on page 33)

Those who make the leap from college directly to the Navy advance their careers quicker than peers in civilian jobs. Check out the Life Accelerator™ at navy.com or call 1-800-USR-NRVY. «> 2001 Paid for by the U.S. Navy. All rights reserved.