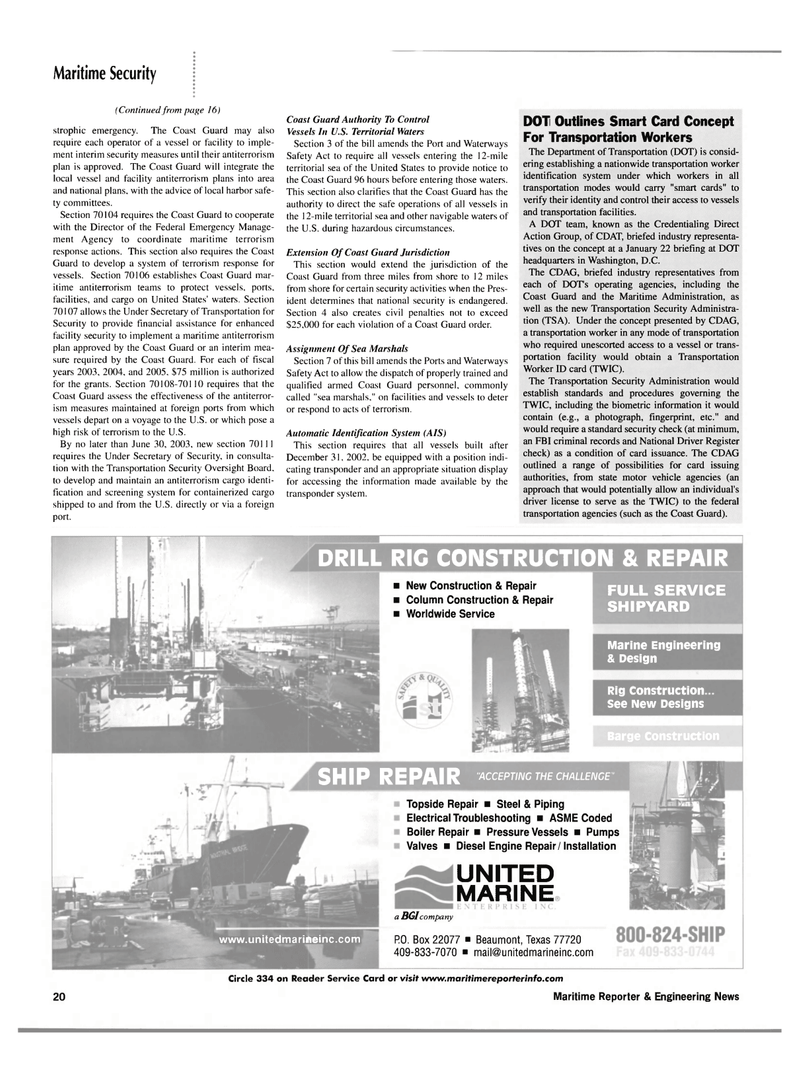 Maritime Security (Continued from page 16) strophic emergency. The Coast Guard may also require each operator of a vessel or facility to imple- ment interim security measures until their antiterrorism plan is approved. The Coast Guard will integrate the local vessel and facility antiterrorism plans into area and national plans, with the advice of local harbor safe- ty committees.

Security to provide financial assistance for enhanced facility security to implement a maritime antiterrorism plan approved by the Coast Guard or an interim mea- sure required by the Coast Guard. For each of fiscal years 2003, 2004, and 2005, $75 million is authorized for the grants. Section 70108-70110 requires that the

Coast Guard assess the effectiveness of the antiterror- ism measures maintained at foreign ports from which vessels depart on a voyage to the U.S. or which pose a high risk of terrorism to the U.S.

By no later than June 30, 2003, new section 701 1 1 requires the Under Secretary of Security, in consulta- tion with the Transportation Security Oversight Board, to develop and maintain an antiterrorism cargo identi- fication and screening system for containerized cargo shipped to and from the U.S. directly or via a foreign port.

Section 3 of the bill amends the Port and Waterways

Safety Act to require all vessels entering the 12-mile territorial sea of the United States to provide notice to the Coast Guard 96 hours before entering those waters.

This section also clarifies that the Coast Guard has the authority to direct the safe operations of all vessels in the 12-mile territorial sea and other navigable waters of the U.S. during hazardous circumstances.

This section would extend the jurisdiction of the

Section 4 also creates civil penalties not to exceed $25,000 for each violation of a Coast Guard order.

Section 7 of this bill amends the Ports and Waterways

Safety Act to allow the dispatch of properly trained and qualified armed Coast Guard personnel, commonly called "sea marshals," on facilities and vessels to deter or respond to acts of terrorism.

This section requires that all vessels built after

December 31, 2002, be equipped with a position indi- cating transponder and an appropriate situation display for accessing the information made available by the transponder system.

The Department of Transportation (DOT) is consid- ering establishing a nationwide transportation worker identification system under which workers in all transportation modes would carry "smart cards" to verify their identity and control their access to vessels and transportation facilities.

A DOT team, known as the Credentialing Direct

Action Group, of CDAT, briefed industry representa- tives on the concept at a January 22 briefing at DOT headquarters in Washington, D.C.

The CDAG, briefed industry representatives from each of DOT's operating agencies, including the

The Transportation Security Administration would establish standards and procedures governing the

TWIC, including the biometric information it would contain (e.g., a photograph, fingerprint, etc." and would require a standard security check (at minimum, an FBI criminal records and National Driver Register check) as a condition of card issuance. The CDAG outlined a range of possibilities for card issuing authorities, from state motor vehicle agencies (an approach that would potentially allow an individual's driver license to serve as the TWIC) to the federal transportation agencies (such as the Coast Guard).