1214, "The Port and Maritime Security Act of 2001. " It is focused solely on terrorism and is not as detailed on planning requirements. The bill only covers areas that the Department of Transportation (DOT) determines are at risk of having a catastrophic emergency in the event of a terrorist attack. Also, because of jurisdictional limitations of the committee, the bill only focuses on DOT activities, not those of the U.S. Customs Service.

The bill is modeled on the Oil Pollution Act. in which Congress outlined broad planning requirements but left most of the details to the discretion of DOT. Like S. 1214, it requires a family of plans, including national, area and vessel/ facility plans. H.R. 3983 calls for grants over three years totaling $225 million (less than S.1214, which over a five-year period, calls for $390 million in grants), but limits them to technology.

New section 70102 of title 46 requires the Coast Guard to conduct port vulnerability assessments for U.S. ports, including an assessment of the vulnerability of each facility in a port, at which there is a high risk of a catastrophic emergency. The results of the vulnerability assessments will be used to implement a national maritime transportation antiterrorism planning system, consisting of a national plan, area plans, as well as vessel, facility, and port terminal plans, to deter a catastrophic emergency to the maximum extent practicable.

By no later than June 30, 2003, new section 701 1 1 requires the Under Secretary of Security, in consultation with the Transportation Security Oversight Board, to develop and maintain an antiterrorism cargo identification and screening system for containerized cargo shipped to and from the U.S. directly or via a foreign port.

Coast Guard Authority To Control Vessels In U.S. Territorial Waters Section 3 of the bill amends the Port and Waterways Safety Act to require all vessels entering the 12-mile territorial sea of the United States to provide notice to the Coast Guard 96 hours before entering those waters.

This section also clarifies that the Coast Guard has the authority to direct the safe operations of all vessels in the 12-mile territorial sea and other navigable waters of the U.S. during hazardous circumstances.

Section 4 also creates civil penalties not to exceed $25,000 for each violation of a Coast Guard order.

Assignment Of Sea Marshals Section 7 of this bill amends the Ports and Waterways Safety Act to allow the dispatch of properly trained and qualified armed Coast Guard personnel, commonly called "sea marshals," on facilities and vessels to deter or respond to acts of terrorism.

Automatic Identification System (AIS) This section requires that all vessels built after December 31, 2002, be equipped with a position indicating transponder and an appropriate situation display for accessing the information made available by the transponder system. 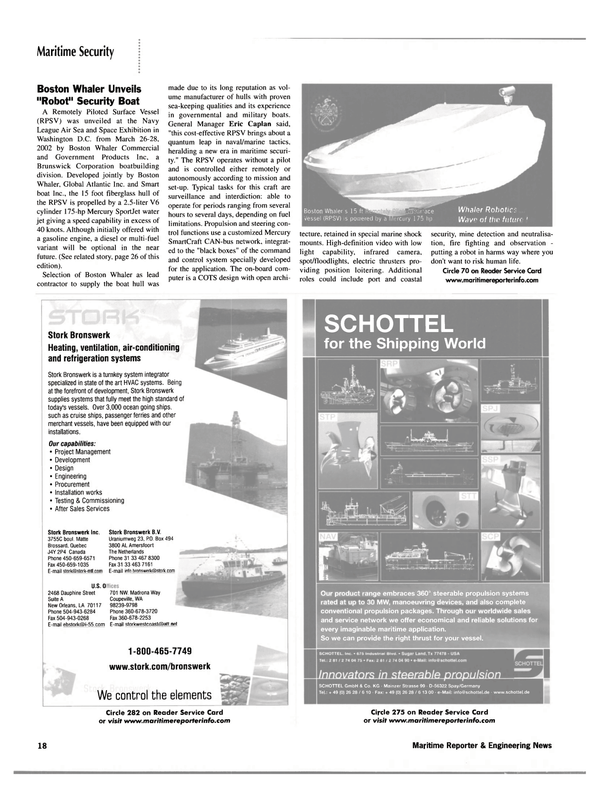